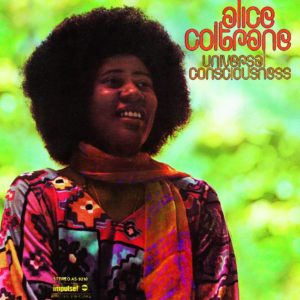 Although not as immediately likable as Journey in Satshidananda, released the same year, Universal Consciousness is nonetheless built on a more radical concept.  Both albums blend Indian music with jazz, but Universal Consciousness (as perhaps the album title implies) reaches for a transcendental synthesis or non-duality, but fought for on a specific intersection of American Jazz, and Indian and European classical musics.  So it is difficult to precisely point to any substantial parts of this as “jazz” in any traditional sense, or as Indian music in any traditional sense, juxtaposed with each other.  This is instead a new synthesis or hybrid that incorporates all those things.  Coltrane plays harp and organ.  These are deployed in unconventional ways, both as glissando-based walls of sound and ethereal, almost disembodied notes that do not seem to be played by human hands.  What is most striking about the album, though, is the use of strings.  Coltrane wrote the string arrangements herself, with transcriptions by Ornette Coleman.  The dissonant string harmonies vividly evoke much the same feeling as some of Coleman’s orchestral jazz works like Skies of America.

This one is a puzzling and intriguing album in the best possible way.  But newcomers should start elsewhere perhaps.