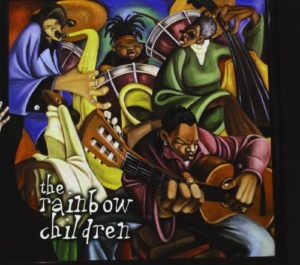 Kind of a forgotten Prince disc, unfairly, because The Rainbow Children is really one of the best from his later years.  With the exception of some weird concluding outtro tracks sequenced strangely on the CD and perhaps the novelty song “Wedding Feast,” this is an album that is solid all the way through.  The musicianship is top shelf, without succumbing to pandering or self-indulgent showiness.  To the extent this was the launch of a more mature sound for Prince, it succeeds completely.  Although it is fair to call this contemporary R&B/soul, much of this follows a kind of light soul jazz/jazz-funk approach (reference, for example, Dave Douglas‘ Live at the Jazz Standard from a few years later).  It also leans toward gospel-style vocals, which is a big bonus.  Of course, there is more than just that here.  “1+1+1 Is 3” is very much a throwback to Prince’s iconic style of the mid-1980s, done quite convincingly.  It highlights just how versatile his guitar playing is across the album.  When people speak, generally, about what a talented performer Prince was, the evidence is right here.  This album is kind of like being at the best possible intimate, private concert you cold imagine from Prince around the turn of the Millennium.  It was around this time too that Prince appeared on “The Tonight Show With Jay Leno” on May 3, 2001 and played a couple songs, including “The Work, Part 1” from this album and a great version of his classic “The Ballad of Dorothy Parker” (originally on Sign “O” the Times) with many jazzy keyboard flourishes.  The album as a whole is close to the sound of that televised performance.  He came back in December of 2002 to perform “The Everlasting Now” on the show too.  Now, some people don’t seem to like the album, often because of the religious content.  But, really, that is only on a few songs (“The Everlasting Now” etc.) and unless you focus on lyrics to the exclusion of almost everything else, the few religious messages are general enough that they don’t hold this back much.  Songs like “Family Name” — one of the funkiest on the album — are political/social commentary anyway.  The real reason this isn’t better known is that it wasn’t heavily marketed and was independently distributed.  It did set up material for the tour that produced One Nite Alone…Live!  Nonetheless, this might be the single most overlooked Prince album.