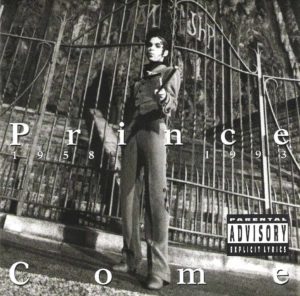 A misfire according to critics, but still a moderate commercial success, Come was disregarded by Prince himself in favor of the contemporaneously recorded The Gold Experience.  Come was created at the beginning of Prince’s notorious feud with his record label Warner Bros., when he changed his name to the unpronounceable “love symbol” which looked something like “O(+->” and he was referenced as “the Artist Formerly Known as Prince.”  Stripping away all the hoopla and critical perspectives of the day, in hindsight this isn’t a bad album at all.  It is not particularly ambitious, and there aren’t any obvious hits here, the album nonetheless is consistent from beginning to end.  There is a “Poem” cut up into interludes between songs throughout the album that should have been dropped (especially the closing “Orgasm”).  But the title track, “Papa,” “Dark” (check those horn charts! and guitar solo!), and “Letitgo” are all solid performances in the smooth soul style that Prince has toyed with going back to songs like “Slow Love” and “Adore” on Sign “O” the Times.  Venturing a guess, critics probably disliked Come because of its refusal to cater to the fads of the day (like the hip-hop/R&B melange of “new jack swing,” etc.), thereby suggesting that the music industry (which included the critics) was promoting inferior music.  Hindsight suggests Prince was right.  While this won’t be anyone’s favorite Prince album, it is a decent one that has surely held up better than, say, Batman, and even Diamonds and Pearls.