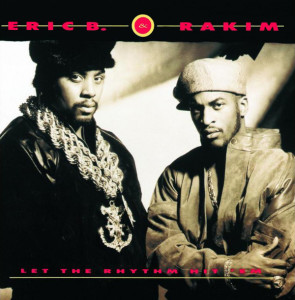 Let the Rhythm Hit ‘Em was an ambitious hip-hop album in its day. The duo pulled rank. Their earlier albums were more popular and acclaimed then, but it’s those other ones that today sound like relics.

There are at least three stages to hearing this album. First, you just dig it because it’s a solid album with a snap to the beats. Next, you start to decipher Rakim’s intricate lyrics. Finally, you realize how intricate Eric B.’s mixes are and how they intensify everything on the disc. You don’t even have to get past phase one. Really that’s the beauty of it. Bobbing to it or dissecting it, either works.

That “Keep ‘Em Eager to Listen” comes right before “Set ‘Em Straight” says it all. Nothing on the album is accidental. This feels like the album Eric B. & Rakim always wanted to make if they could. Well they did it. The record receives all the talent like uninvited guests who arrive with inexplicable expectancy.

There seem to be more than enough James Brown samples to go around. It takes quite a Godfather fan to pick out precisely where they come from though. Eric B. breaks everything down a rebuilds something of an entirely different form. He was a bridge between old school and new school. As a DJ he could scratch with anybody, but he could build cohesive songs through improvisation. Eric B. seems to have a greater awareness of why he’s improvising and where this is all headed.

Rakim was simply one of the most talented rappers and lyricists of his day — a status that isn’t exclusive to hip-hop. “In the Ghetto” is the unsentimental tale of his grim existence. Rakim flexes his lyrical muscle to get some needed breathing room.

This is known as a lyricist’s album, but that sells Let the Rhythm Hit ‘Em short. Rakim lays out some fine lyrics but it’s the delivery and the assembly of the choice whole that make this a classic. Bleak in a dense mass. The lyrics fit into an orchestrated statement said in more than words.

Hip-hop albums too often end up disposable vehicles for nonsense fads. Eric B. & Rakim set out to make an album for the ages. Let the Rhythm Hit ‘Em quickened hip-hop’s ascension. A few have continued the challenge. The others perhaps ignore this as it might reveal their own weaknesses.