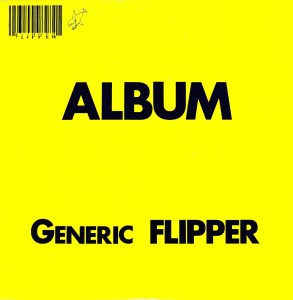 Well, ever hear an album and instantly love it?

Flipper grew out of the remnants of the punk scene.  They formed in San Francisco.  Not exactly the epicenter of punk, but their distance from the leading proponents of that movement probably helped them forge their own unique sound.  Most Flipper tracks follow a similar format, with guitarist Ted Falconi scratching out abrasive, atonal guitar noise and one of the bass players (Will Shatter and Bruce Lose [AKA Bruce Loose] — they alternated singing and playing bass) carrying what passes for a melody.  The singing sort of creates its own melody, not always in sync with the bass line melodies, and not really “sung” either, so much as shouted and groaned in almost a monotone.  The drums (Steve DePace) thud along in a kind of plodding way, lo-fi and sort of distant and sometimes with added echo effect, yet also deceptively varied compared to most punk and hardcore of the day.  This was an early form of “sludge rock”, taken up later by bands like Black Flag (My War) and The Melvins.  The sound is very heavy.  As confrontational as the band was, and as much as they are totally incompatible with being part of some sort of upper crust of society, their driving, powerful sound doesn’t reveal any guilt about acting like they fucking own the world as much as anyone else.

“Life” has the brilliant lyrics “life, life, life is the only thing worth living for.”  This empty turn of phrase utterly robs desire of all its power, in a wonderful way.  Basically, by excluding all other things as being “worth living for,” it relegates all other worldly desires to the status of worthless shit.  This is basically what psychoanalysis says too, incidentally.  What is left, is just life itself.  You either find a way to make that worth it, or not.  Flipper turn this into an anthem!  The chord progression on the song is indeed one of the few on the entire album that has any sort of ascending, happy-sounding resolution.

“Who needs cancer, it’s boring” (“Living for the Depression”)  Well, if that line doesn’t do it for you, the band conveniently lets you know that “this song rhymes.”  But they also call out the listener, ending the song by shouting about “a real cheap fucker like you, copout!”

This is an album of solidarity.  Either you appreciate the band avoiding what most people would find enjoyable, hell, acceptable, only the most like-minded remain.  Well, there is plenty to love here.  A big reason a lot of people loved (and still love) Flipper is that they had the guts to actually go out and make music like this.

The “hit” was “Sex Bomb.”  Here’s a song that has probably the most degenerate horn section around (actually just two saxophonists).  Like string orchestration, horns are kind of a capital-intensive way to make music.  To set one against some guys in a degenerate rock band yelling nothing but “Sex bomb, my baby, yeah!” for minutes on end is a daring way to defile everything that such elements usually mean.  This takes the sort of tools of the powerful and makes them crass, ugly and unsuitable.  This is a glorious musical revolution (of “kynicism“).  The was a time, just before the Great Depression, when around the world musicians were doing this sort of stuff (chronicled in Michael Denning‘s book Noise Uprising).  It is also a bit like industrial rockers Rammstein would do with fascist iconography years later, because it reduces capital-intensive musical accoutrements to simple pleasures that are put in the service of something else, that here at least seems deeper.