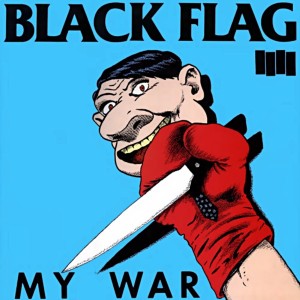 So much ANGST!!!!!  Fans divide over the legacy of the mighty Black Flag.  Pioneers of the 1970s and 80s California underground, they went through personnel changes and stylistics shifts through the years.

On the one hand, you have those who say “Stop after The First Four Years.”  Those were the early hardcore years.  Black Flag played fast, loud and snotty.  They were often pretty funny too.  Vocalists Keith Morris and then Chavo Pederast took the mic in the early years.  The thing about those early days was that the Flag was very balanced.  Founding guitarist Greg Ginn was the reclusive introvert, the enigmatic wizard behind the band’s totally unique approach to punk rock.  Hey, maybe the music should matter more than the clothes!  Confrontational and contrarian, the band leavened those elements with the wild, lackadaisical efforts of the vocalists, singing blunt lyrics so often drenched with monochromatic irony.  Bassist Chuck Dukowski, the outgoing, confrontational clown of the band, was in some respects the polar opposite of Ginn.  All together, they came up with a few devastating recordings of the likes of “Nervous Breakdown” and “Jealous Again”.  Not everybody got the jokes, like “White Minority.”  But fuck those people, seriously.  You could see the Flag as an extension of punk.  They were just the new product of a different central California culture.

When Dez Cadena took over vocals for a while, something kind of changed.  Cadena was a pretty weak vocalist.  He belted out a kind of gutteral howl.  That was about all he could do though.  The band was still kind of funny (“Louie, Louie”), but they kind of took on a more serious overtone too.  They were growing, but they suffered from growing pains.

Then you have the Rollins years.  Henry Rollins came along, by chance almost, mid-tour while Black Flag played the East Coast, and filled the void on vocals after Cadena focused on playing guitar.  Rollins came to an established band as a fan, a kid no less.  Rollins brought a much deeper vocal palate to bear.  Yeah, sure, it was all angst, but it was a deeper and more nuanced range of angst than the previous vocalists could deliver.  There is no shortage of Henry-haters.  Was he pretentious?  Maybe.  He started off as just a ball of pure enthusiasm.  As he grew older, a macho streak developed and he inserted a lot of “poetry” into the music.  But for a time he was just performing the songs written and developed by the existing band, for the most part. My War was the second full-length album from the Henry-era band.  The first with Henry was Damaged, which was and remains the band’s greatest achievement.  It’s a bombshell.  Great songs are everywhere and it never lets up, mostly fast and furious but with the fiercely sludgy closer “Damaged I” like a brick wall at the end of the line.

After all sorts of legal hassles surrounding the release of Damaged, and two of the band members doing a little jail time for surreptitiously releasing Everything Went Black against a court order in the unruly aftermath.  But by 1984 the band was clear of its legal troubles enough to release new records again, and they did so with no less than four full-length albums that year.  My War was the first of the new crop.  It opens with the departed (er, booted) Dukowski’s title track, a seething cauldron of paranoia and rage, followed by the driving “Can’t Decide” coupled with another Dukowski number “I Love You” plus “Forever Time” and “The Swinging Man,” providing a relatively brisk pace for the first side of the LP.  Side two just grinds to almost a halt with the achingly slooooow “Nothing Left Inside.”  What, “Damaged I” no fluke?  Hell no.  This was the new sound of Black Flag.  The second side of the album continues to ooze forward and the same crushingly slow amble.  Henry hits his stride with curdling screams.  All through the record he thrashes about and rips apart every bit of the lyrics, which are usually pretty blunt.  Yet he manages to convey that there is something deeper to what seems so simple and crude.  He does a lot with very little.  He had a lot of charisma.  Greg Ginn plays like crazy.  He’s also on bass under the alias Dale Nixon.

The “early years” crowd often points to My War as the nadir of the band.  Many can’t stand it.  Others look at it as simply flawed.  But there are also a lot of real, dedicated Black Flag fans out there (this writer included) who come to this album more than the others.  It’s got the most extreme elements of of what Black Flag had to offer all in one place.  There aren’t the funny songs, but you can listen to those too, just elsewhere!

My War can be summed up in a sentence, by RateYourMusic reviewer bnoring, “Side one slaps you, while side two drowns you.”

The fragile mix in place for My War didn’t last all that long.  It was only a few years later that the slightly older Rollins kind of withdrew from his involvement within the band’s interpersonal matrix and Ginn got distracted running the then rapidly expanding SST Records label.  It did hold together here, though, well enough.

Black Flag might be said to represent the best of what punk ever had to offer.  They were inclusive yet confrontational, they drew in influences that seemed the antithesis of what “simple” punk rock was allegedly about (hippie rock like The Grateful Dead and modern jazz).  Through sheer determination they built up a following on their own, from nothing at all.  My War was a kind of transformation that kept the brilliance of their music alive by rethinking its makeup.  Sure, there were inklings early on that Black Flag took inspiration from the likes of Black Sabbath, but the context for how that was expressed radically changed in 1984.  If Black Flag once prided themselves on playing more intricate music than typical three-chord punk, then playing at a pace so achingly slow you cannot ignore it is a new angle.  In a way, it put the concept behind the music in the forefront.  Years later, the band was more insular, not so much rethinking its purpose but trying to refine it in a reductionist sense.  They still rocked but it kind of wound down.  Glory in the wonderful, liberating and fleeting possibilities that My War presented every time you listen.  Maybe Black Flag didn’t carry the torch themselves later on.  Others did.  But what shouldn’t be forgotten is that others wouldn’t have carried it so far or with such purpose without Black Flag being there already.  Part of that was because Black Flag refused to give their fans what they expected.  That kind of willful alienation is often at the heart of something special.  This is sinister motivational music.