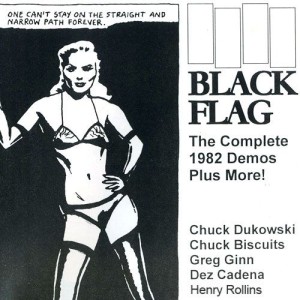 When fans talk about Black Flag and long for the early years, I kind of tune out.  Don’t get me wrong, the early years produced some great music (“Nervous Breakdown,” “Jealous Again,” etc.).  But for me, Damaged and the slew of 1984 albums represented the band at its peak.  Damaged, My War and Live ’84 are my favorites, and among the best rock the 1980s had to offer, in my opinion.  The bootleg The Complete 1982 Demos Plus More! presents recordings from the time when everything went black, and legal issues prevented them from releasing any recordings (Greg Ginn tried, in fact, but ended up in jail briefly for doing so).  These are lo-fi demos, no doubt.  But there are things to like.  For instance, it helps that there are no stupid, uh, “sound effects” on “Slip It In”, but it would still sound better as an instrumental.  The tempos aren’t nearly as lethargic and sludgy as on My War, which makes this somewhat more forgettable and generic sounding.  Henry Rollins‘ singing is much less effective here than on the studio recordings that saw formal release.  So, to sum up my feelings about this, I would have to say that if you took my favorite Black Flag albums and took away many of my favorite aspects, you would end up with something like this.  To me, that’s a dumb proposition, but I’m still glad to hear more Flag so I won’t complain too loudly.