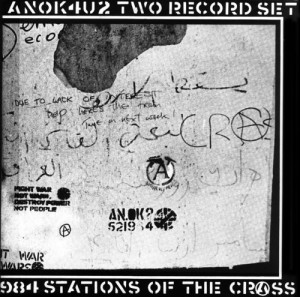 People tend to say things like this about Crass: “I have no problem with mixing music and politics and I like the lyrics, but when the music is shitty, why bother??”  Usually this is more of a political statement that it appears.  If there is to be a real (anarchist) revolution, then the music and other cultural forms of the old regime must change too.  The sorts of music that rely on “great individual” tropes and reinforce hierarchies of power would all need to go.  Does anyone accuse Céline Dion or her ilk of being unmusical?  Symbolically, though, her music is all about the “great singer” and therefore inexorably bound to an undemocratic way of life.  So, really, these statements amount to saying that Crass’ politics are fine as far as they are consistent with political liberalism, but their music makes an unforgivable step beyond liberalism and therefore must be condemned.  Noam Chomsky, probably the most well-known public intellectual with anarchist beliefs, has made this point repeatedly, that liberals draw a line in the sand that they say cannot be crossed (to the left).  Well, Crass had no intention of ever recognizing such lines in the sand.  They weren’t going to get mired in an endless liberal discussion that guards the safety of the status quo by limiting action to the confines of polite debate.

Drummer Penny Rimbaud wrote an essay/memoir entitled The Last of the Hippies: An Hysterical Romance.  While factions of the punk movement saw themselves as opposed to the hippes/yippies of the 1960s, others — like Crass — saw themselves as an extension of that earlier counter-cultural movement.  Yet, a common criticism during their heyday, as noted in the The Story of Crass, was that they advocated a middle-class sort of revolution.  Some critics saw a proletarian revolutionary stance as needing to be more communist than anarchist.

Regardless of what politics and ideologies listeners bring to Crass’ music, the important point is that Crass’ music was inexorably tied to their own politics.  It becomes rather difficult to separate out the politics from the musical forms.  What is intriguing about one should be intriguing about the other.  The flaws of one are the flaws of the other, too.  The criticisms from the communists hold some weight, though at the same time Crass’ music/politics hold some promise of ridiculing power in a manner that is difficult to corrupt — just try to pigeonhole Crass as “sellouts”!

The follow-up album Penis Envy was more conventionally musical, and indeed a better album as such.  Stations of the Crass has a more in-your-face sound.  The guitars are louder and noisier, and a more prominent part of the music here.  The songs rely on mockery and puns (“Chairman of the Bored”).  Right from the opener, “Mother Earth,” Crass make clear that noise, the unwanted sound from the standpoint of established society, would be part of what they relied upon and celebrated.  The twin guitars deftly grind away.  This might not quite have the raw force of American sludge rock that would emerge shortly, but it shares some characteristics.