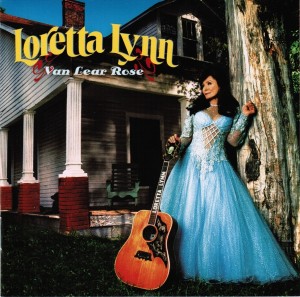 Maybe much of the music industry had forgotten about Loretta Lynn by 2004, and younger urban audiences may have never really heard of her in the first place.  But she was suddenly back in the charts with Van Lear Rose.  And this was a convincing new offering, earning as much (or more) critical praise as it garnered in commercial success.  Lynn wrote or co-wrote everything here, and it is the songwriting that makes the album what it is.

“Miss Being Mrs.” is a song she started co-writing with a friend back in the early 1980s, an idea that started with the title phrase, finished for purposes of the album.  It is interesting that the song had origins so long ago, because Lynn was widowed and it seems like a very personal song for her, even if its origins suggest otherwise.  It is the most spare performance on the album.  It is just Lynn singing with acoustic guitar.

The story behind “Portland, Oregon” is described in her memoir Still Woman Enough.  Lynn never drank much.  But she was in a motel in Portland with Cal Smith (she admits to having a crush on him in her younger days) and various band members.  Not knowing what to order, Smith suggests a “Sloe Gin Fizz.”  As she gets a little drunk, her and Cal goof around to try to stir up controversy — Lynn’s husband Doolittle was a notoriously jealous man always suspicious of her cheating on him (even though it was him who regularly cheated on her).  As she became pretty drunk Smith told her the bar was closing.  Undeterred, she asks the bartender herself only to find out that the bar wasn’t really closed yet.  So she orders a pitcher of sloe gin fizz to go.  When she got back to her room, she started writing the song.

“High on a Mountain Top” has a bluegrass feel, with a clunky beat, chanted vocal backing, and rough-hewn violin.  Lynn’s lyrics refer to her upbringing in the coal mining community of Butcher Holler, Kentucky.  The title song “Van Lear Rose” is a tale about her family, specifically her mother — Lynn nominated her mother as her greatest teacher and her mother then received an award from the Carter White House in the late 1970s.  “Story of My Life” is of course another autobiographical song, with more of a sense of humor than “Coal Miner’s Daughter” and with a longer time frame to draw from.  “Little Red Shoes” is another autobiographical tale, delivered as sort of a spoken monologue, but it is less coherent than the way Lynn tells the story in one of her memoirs.

This “comeback” album (Lynn saw 2000’s Still Country! as her real comeback) was her best-selling since the late 1960s.  Trendy indie-rock producer Jack White is on board.  He is quoted as being a big Lynn fan, and he sought her out to do this project.  In many ways, White is the album’s biggest liability — even though his very presence is what gave the album so much exposure and its commercial success.  He over-uses heavy reverb and sustain on electric guitar (“Little Red Shoes”).  If this is supposed to be a “crossover” effort, at times it seems like little more is done than put boilerplate (circa 2004) indie rock guitar behind Lynn.  Though, in fairness, White also shakes Lynn loose from complacency and recording more of the same.  He pairs her with his own hand-picked band, which Lynn nicknamed the “Do Whaters” because they did whatever was needed.

Lynn worked from within the Nashville system most of her career.  As a result, she churned out albums at a breakneck pace.  They were as a rule full of filler.  Against that historical precedent, Van Lear Rose holds up pretty well.  Lynn wasn’t know as primarily an album-focused recording artist.  Even the best here doesn’t quite stack up with the finest recordings of her career (see Honky Tonk Girl: The Loretta Lynn Collection for that).  Still, this comes close enough to belong in the conversation with her very best recorded work.