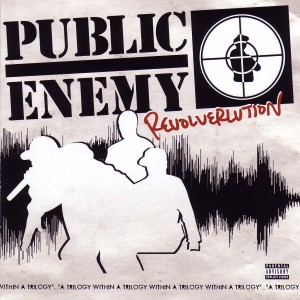 The year 1999 was pivotal for Public Enemy.  That was when they committed themselves to being an independent act, releasing music on Chuck D‘s own SLAMjamz label (distributed by Koch).  Yet, the price paid for independence from corporate media is the near total critical/radio/etc. indifference that goes with a minuscule marketing budget.  Their sound changed a bit too, gravitating toward more live instrumentation — they had done that before but now it was a leaner, guitar-driven approach — and using rhythm rather than shrieking noise to create a sense of aggression and urgency.

This starts off strong.  “Revolverlution” and “Gotta Give the Peeps What They Need” are some of the best offerings of the new material.  But the nagging thing about this album is that it isn’t all new material, exactly.  There are live tracks, old interviews and radio announcements, and remixes.  All these things are intermingled.  Now, some of the miscellaneous live and remix material is quite decent. (“Welcome to the Terrordome (LIVE Winterthur Switzerland 1992),” “B Side Wins Again (Scattershot Remix)”).  But there are only a handful of really compelling cuts across the whole album, and there is plenty of rather dubious filler.

Revolverlution is perhaps the group’s album with the most input from “minister of information” Professor Griff.  He is the lead MC on “Now A’Daze” and the rather good metal/hip-hop hybrid “What Good Is a Bomb” with 7th Octave.  In the past it was somewhat hard to tell what Griff contributed to recordings, specifically, but here his contributions are unmistakable.

Neil Young gave an interview talking about Living With War, his album indicting war in Iraq and President George W. Bush’s global “war on terror”.  He said he wondered where people like Bob Dylan were on those issues and felt like he had to do it himself.  Well, if old Neil was listening (he probably wasn’t) he might have noticed that Public Enemy was already making songs about just those topics (“Son of a Bush”).  The philosopher Hannah Arendt famously wrote about the trial of a Nazi officer Adolph Eichmann after WWII by coining the phrase “the banality of evil.”  As Judith Butler summed up Arendt’s concept, “that for which she faulted Eichmann was his failure to be critical of positive law, that is, a failure to take distance from the requirements that law and policy imposed upon him; in other words, she faults him for his obedience, his lack of critical distance, or his failure to think.”  If there is one characteristic that would define Public Enemy in their later years, it was that they tried harder than before to be the band that didn’t let things go, but did what they could to step outside the machinations of a music industry that they felt was going in the wrong direction, despite the commercial price they paid for their integrity.

The Chuck D has been a vocal proponent of remixes, emphasizing how it is part of an ongoing process of reinterpretation that is really an extension of sampling in hip-hop.  He has claimed that the album format was declining in relevance as digital downloads shifted interest to individual songs — something the group took seriously as the first major act to release an album (There’s a Poison Goin On….) for download online.  Yet, the cynical might take another view and say that the way old raps remain over new beats in these remixes could be a way for Chuck to lionize his own contributions while undermining the legacy of classic beats from producer Hank Shocklee, who acrimoniously split from the group years earlier and was at the center of a disastrous reunion attempt making a soundtrack album.  Anyway, the group had a contest for fans to remix classic PE tracks and the six “winners” are here on this album.  No one will confuse them with classic PE material, though there is at least one successful remix (“B Side Wins Again (Scattershot Remix)”).

Greatest Misses was a kind of precedent for an album like this, with a blend of unreleased material plus remixes and such.  But the former was a much stronger set of remixes, still coming from the band’s peak and involving some of the original (and now legendary) producers.  Revolverlution is one of the band’s weakest albums.  Now, if the group had taken the best new material here used it in place of the weakest stuff on New Whirl Odor or How You Sell Soul to a Soulless People Who Sold Their Soul??? (or merging the best selections from all three albums), now that would have been a killer album.  But it is still a good idea to check out a few of the best individual songs here, because they are great.