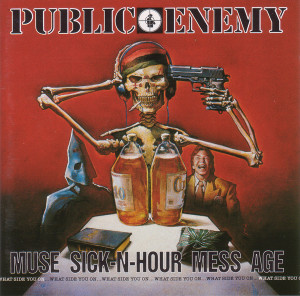 The demise of Public Enemy?  Hardly.  Muse Sick-N-Hour Mess Age certainly heads in a different direction than earlier PE albums, but it still is a worthy album from this seminal group.  It does, however, go on far too long, with a few total duds (“I Ain’t Mad at All”) and more than a few songs that are simply mediocre filler (“Thin Line Between Law & Rape,” the commercials).  Yet the best cuts (“Whole Lotta Love Goin on in the Middle of Hell,” “Live and Undrugged, Parts 1 & 2,” “Give It Up”) are still killer and Chuck D delivers one of his finest performances at album length as a pure rapper.  And, more often than not, the political statements are actually more convincing here than before.  The group had experienced much turmoil in the preceding years.  Significantly, the great crackdown on sampling in hip-hop had begun, creating insurmountable legal barriers to making an album like It Takes a Nation of Millions to Hold Us Back or even Fear of a Black Planet.  So the beats here rely more on newly-recorded live instruments and something closer to an R&B groove than the early records.  The complaints that this lacks the “sense of unstoppable purpose” the group once had are fair, but really that sense of unstoppable purpose is in the album, just inconsistently and sometimes struggling to find its way past all the barriers put in its path over the prior years.  To put a finger on one of the culprits, you could identify the sameness of some of the bass-heavy grooves as being more stagnant than the unsettling, constantly changing sampled beats of four to six years previous.  Fans of the classic early albums should definitely seek this one out, but the unconverted will probably see it as merely a good album that stops well short of blowing their minds.  If it had been trimmed back ten minutes or so, maybe that would be a different story.