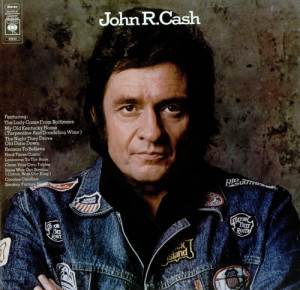 When Johnny Cash’s popularity sagged in the mid-1970s, his label Columbia stepped in to guide the recording process.  Someone from the label picked out some popular songs, ran them by Cash to see which ones he would record, then went out and recorded all the instrumentals and simply had Cash sing over the top of the finished package.  It was a very conscious effort to make Cash seem “relevant”, from the picture on the album cover of Cash with longer hair and a denim jacket to a warm, muted sound that fairly drips with the ambiance of huge American-made cars, faux-leather chairs, shag carpeting, dim yellow lighting, and other accoutrements of a time when the glory days of the American working man were starting to crumble.  Cash practically disowned this album as a sell-out on his part.  Yet, dated or not, this is a fair and listenable effort.  It helps that there are lots of good songs, and the mellowness makes it a decent period piece.  This may not be representative of anything else in Cash’s large catalog, but it isn’t nearly as bad as some would have it.