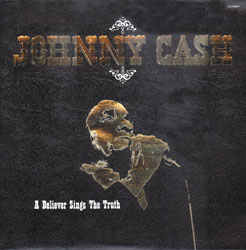 A relatively unknown album in some ways.  It is perhaps the most eclectic one Johnny Cash ever recorded.  Stylistically it’s all over the place.  Jo-El Sonnier is on the sessions and his vaguely New Orleans second-line/Dixieland styled “I’ve Got Jesus in My Soul,” complete with a clarinet solo and brass band chorus, is something unusual for Cash.  There is a version of Sister Rosetta Tharpe‘s “There Are Strange Things Happening Everyday” that’s decent too.  In his first autobiography, Man in Black, Cash told about going to a Tharpe concert in the early Sixties, as his amphetamine addiction grew.  “Oh Come, Angel Band” is the song most frequently included on compilations.  The horns, boogie-woogie piano, and contemporary backing vocals make this album unlike most others from Cash.  In a way, it seems a little like he was taking cues from what Elvis had been up to earlier in the decade (Aloha From Hawaii Via Satellite, etc.), or maybe even what Bob Dylan was trying to do around this same time (Street-Legal, At Budokan).  Anyway, A Believer Sings the Truth isn’t gonna convince anyone of Cash’s talents if you haven’t heard him in better form elsewhere.  But this one finds him stretching and finding some success with many different approaches.  It holds up fairly well.  It’s too bad he didn’t record any secular albums the same way around this time, because it does seem like producers killed a lot of his albums back then.  Oh, and here’s a spoiler.  “The Greatest Cowboy of Them All” is god.  God is the greatest cowboy of them all.