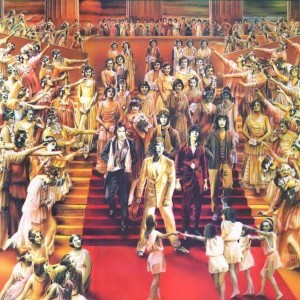 A step up from Goats Head Soup, but still well short of the best Stones albums.  The title track is great, and some of the later throwaway songs (“Time Waits for No One,” “Luxury,” “Dance Little Sister”) still have a catchy quality to them.  But on the minus side, some forced and vapid songwriting (“Till the Next Goodbye,” “If You Really Want to Be My Friend,” “Fingerprint File”) can really drag.  There is a dull cover of a great Temptations song (“Ain’t Too Proud to Beg”).  In a way, this could be seen as the Stones following the pattern of their early-60s albums just updated with mid-70s studio gimmickry.