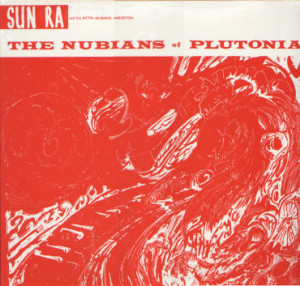 Originally released in a blank sleeve as The Lady With the Golden Stockings, but quickly renamed The Nubians of Plutonia for subsequent issues, this might represent the peak of the Sun Ra Arkestra’s Chicago period in terms of revealing the totally unique foundation of the group’s music.  While Jazz in Silhouette might be a better album, it doesn’t as explicitly present the otherworldly vision that would take the group to so many different stylistic touchstones over the coming decades.  But this album perhaps does point in that direction.  It’s eclectic.  The lineups and voicings shift.  At times an emphasis on rhythm supplants that of melody or harmony.  Vocal chants reveal hints of theatrical live shows.  The group sounds confident and polished.  The solos are incorporated in more daring ways here than on, say Angels and Demons at Play, because the solos retain a bit more of exotic, spacey elements and the polyrhythmic percussion backing holds constant throughout songs like “The Lady With the Golden Stockings.”  The band might not have had the recognition of the top jazz stars of the day, with gigs still sparse, but they were reputedly fairly well known and respected within Chicago.  So this album is all about the warm glow of the Chicago years, before a move to New York City in the early 1960s shook things up and took the music into other unexplored corners of the universe.  Great songs, great performances; you can’t ask for more.  This is one of the essential Sun Ra recordings.