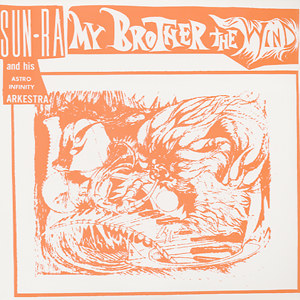 My Brother the Wind Vol II is a tale of two sides–Sun Ra had a penchant for programming El Saturn LPs to be rather different from side to side.  One is filled with solo recordings of Sun Ra taking his then-new mini-moog synthesizer through its paces.  The other side features a full band entering the realm of soul jazz.  Vocalist June Tyson is the star of the group material.  She must have been born with the same Saturn-ian mindset as Ra, because she seems to intuit all of Ra’s music in a way that hardly could be learned.  The group performances feel a bit as if they are making an effort to connect with the organ-driven groove jazz of the type Jimmy Smith played (maybe a closer comparison though would be Larry Young‘s Unity).  That was some of the most popular commercial jazz of the last decade.  The thing is, it was by this time the music of the previous decade.  Sun Ra seemed to be a bit behind the curve when he offered it on an album released in the early 1970s.  Nonetheless, the wilder sax soloing here (“Otherness Blue”) is as unexpected as Sonny Sharrock‘s guitar was in Herbie Mann‘s band (Sharrock has told a funny story about an unfortunate gig in Oshkosh, Wisconsin when some old ladies booked Mann, with Sharrock in tow, entirely by mistake out of confusion between him and Herb Alpert & The Tijuana Brass and struggled to be polite after hearing Sharrock’s psychedelic performance on electric guitar).  The moog tracks on the flip side were probably pretty out there at the time.  Given what others, and Sun Ra himself (The Solar-Myth Approach Volume 1, The Great Lost Sun Ra Albums: Cymbals / Crystal Spears, Concert for the Comet Kohoutek, etc.), did in the coming years, the sense of experimentation feels quite a bit tamer in retrospect.  This music can feel a little dated in ways later electrified efforts by the Arkestra wouldn’t.  Although this material is decent and pretty accessible for the most part, and it does map out certain elements that would become defining characteristics of Ra’s Seventies period, feel free to skip right past this and come back to it once you have a fair amount of the Sun Ra catalog under your belt.