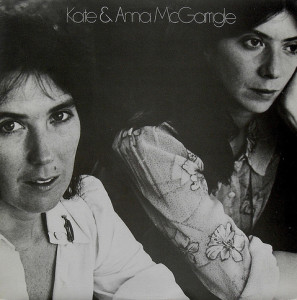 Owing more to British folk-rock traditions of the previous decade than to, say, the Greenwich Village urban folk scene of the prior 15 years, the debut album from Canadian sisters Kate & Anna McGarrigle is a great example of what folk music can offer.  No doubt the sound of the recording owes to having the legendary Joe Boyd as co-producer.  This quirky music ranges from Irish-flavored folk (“Foolish You”), to Californian singer-songwriter soft rock (“(Talk to Me of) Mendocino”), to Appalachian country music (“Swimming Song”), to light soul (“Kiss and Say Goodbye”), to vaudevillian quasi-bel canto pop (“Blues in D”).  The song “Heart Like a Wheel” was recorded as the title track to an album by Linda Ronstadt, and the McGarrigle sisters do a version here.  This is an album that seems feminine.  The sort of machismo and derring-do that infects such a disproportionate amount of music is, seemingly, absent.  Instead, there is a lovely, welcoming warmth.  The music is literate without imposing a self-professed intelligence on the listener, friendly without descending to limpid new age “positive thinking” mantra, self-critical without wallowing in morose navel-gazing.  In spite of the varied stylistic touches, the album remains centered in its own space.  Other styles float in like house guests adding to a conversation.  Because of this approach Kate & Anna McGarrigle is an album that may come on a bit slowly.  But it hangs on with its lovely wit and grace to be one of the finer folk-rock offerings of the tail end of the singer-songwriter boom.