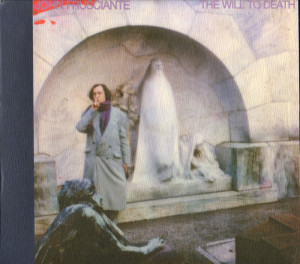 When iconoclastic filmmaker John Cassavetes started making movies he funded entirely himself, he filmed them in a way that ignored getting a scene “in focus” or the sound “just right” if that would in any way inhibit the actors. The Will to Death is one of six (!) albums John Frusciante released in 2004. He recorded it without worrying about his guitar going slightly out of tune or missing a beat here or there. More important than any detail is the basic spirit of each song. That is what matters to music like this. It’s not polished, but it sure is sincere.

An interviewer once recalled meeting jazz luminary Sun Ra at Ra’s place in Philadelphia. Sun Ra was looking around for some sheet music while the interviewer waited. When asked about the random piles of things, Sun Ra responded by saying that if he organized, he would only find what he was looking for. That story might explain a great deal about John Frusciante’s The Will to Death (and maybe Cassavetes too). Recorded quickly, without extensive revising and adjusting, the album thrives in what Frusciante perhaps never expected his songs contained.

The brooding, frustrated guitar sounds mark the introspective music of The Will to Death, as might be obvious from the title alone. Yet, it is his resilient attitude that makes John Frusciante fascinating. He survives the contradictions of being the self-destructive outsider in his comfortable other gig (Red Hot Chili Peppers). Surviving wouldn’t seem to be his objective, though. There is an unending desire to grow in each of his songs. Despite the occasional maudlin flourishes and the many clumsy lyrics, there are no diversions from that basic desire. The missteps in the music are weaknesses it seems are shared in the person of John Frusciante. What places The Will to Death far above his previous solo recording is his courage to proceed straight through those flaws. The hidden beauty of the album is that it does proceed without stopping to question itself. To do that genuinely is always enough.

“The Will to Death” is probably the best song Frusciante has written to date. In a somber melody, he wraps the hopelessly romantic ideas that can define a life. “Loss,” “The Days Have Turned” and possibly “Time Runs Out” follow as the next best examples of Frusciante’s evolving songwriting skills. At their best, the songs, in both trivial detail and grand aspiration, simply are what they are. The same also goes for Frusciante’s voice. His vocals have greatly improved across the years. Together with Josh Klinghoffer‘s nicely suited contributions on drums and some miscellaneous instruments, the difficulties of making music like this fade away.

An album like this probably isn’t for everyone. The immediate pleasure of Red Hot Chili Peppers’ recordings will surely appeal to many more people. Those songs are direct reflections of attitudes often found so desirable. The Will to Death is something different. It is obscure, indirect. Any reaction to it has to be earnest because no guidance is given toward a particular one. John Frusciante has made a commendable — courageous — effort here. You might be surprised what you find in hearing it.