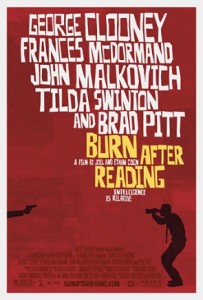 Admittedly, the only Cohen Brothers movie that I’ve ever liked is The Hudsucker Proxy (1994).  But I came to Burn After Reading not realizing it was a Cohen Brothers movie.  Anyway, the plot here is one part expanded love triangle (akin to Sartre’s No Exit) and the other part zany spy comedy.  Unsurprisingly, the characters are caricatures, and the audience is supposed to smugly view themselves above them.  Each runs about chasing after an image of themselves they want others to adopt, be it Makovich’s uncompromising intellectual, Clooney’s athletic lothario, or McDormand’s youthful striver, yet they all find no one really interested (much like Jason Alexander‘s character George Costanza can’t find anyone to adopt his desired nickname “T-Bone” in an episode of TV’s Seinfeld).  The film wants to be kind of like a Kafka novel, probing the emptiness of formal law and order, but it stumbles as it mocks pretty much all of the central characters.  Nobody in the film ever sublimates their venal greed and desires.  Brad Pitt’s character is about the only one the filmmakers can’t mock effectively, because they never really present him as having any ambitions beyond exercising and being a dope.  Put this next to Orson Welles‘ Kafka adaptation of The Trial (1962) and it seems a bit weak.  Sure, there is some good acting and a few funny gags.  But the film sort of preys upon “simple” folks as targets for ridicule.  It would be a far more subversive film if it included some of the CIA bigwigs or other peripheral yet powerful characters in the film and also held up their stupid desires and dreams for ridicule (perhaps like early Miloš Forman films).  As it stands, Burn After Reading is about halfway to a good film.  But only halfway.