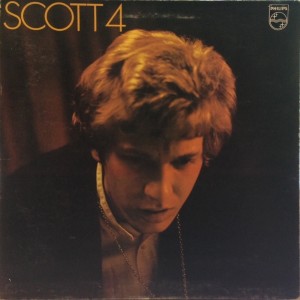 Scott 4 is easily one of my favorite albums.  I do recognize that some people won’t be able to relate to this music and therefore probably won’t bother to understand it. But I think that for what it is, Scott 4 is perfect.  Its compassion, realism and sincerity have always impressed me.

Over the course of thirty years Noel Scott Engel (under the stage name Scott Walker) went from pop heartthrob adored by swarms of teenage girls to cult icon to reclusive mystery man and dark experimental maverick. Scott Walker was born in America, but his fame in the 1960s and 70s came in England.

Most amazing is that this music exists at all. All attempts to categorize it fail. Is it part of the counterculture, or part of the establishment?  Or both?  Perhaps it’s the directness. Scott Walker takes his music directly into a soft vortex of emotion and intellect.

Scott Walker’s craft seems like bad idea on paper. Scott 4 isn’t an album you can convince people to like. Most of its supporters are the types that have heard everything under the sun and have come back to what less discerning ears would lump with much more forgettable music. Scott Walker’s voice may sound flip, but he made some of the most heartfelt music you may ever hear. Scott 4 is personal. It takes a certain something to appreciate the album’s depth, but that doesn’t lessen its achievement.

If I were to sum up Scott Walker’s career in the 1960s, I would say that his greatest accomplishment was taking the music of extroverts and turning it into music for introverts.  He took the kind of orchestral pop that has a lot of immediate and superficial appeal, and was the epicenter of the “old guard” of the institutions of the music industry, and turned it into music that is edgy and subtly a countervailing force against the establishment.  He obliterated the notion that orchestrated pop had any sort of deterministic, essentialist qualities.  It was a form that could serve any ends.  You won’t understand Scott Walker by listening to this album just once.  The craftsmanship and brilliant songwriting are surprisingly elusive. It is like he could hide things in plain view.  And it is as if he founds the seeds of something that included the old and the new, together, moving forward in a world where the all sorts of perspectives and musics have a chance to exist simultaneously and harmoniously with all their differences still intact.  Brilliant.