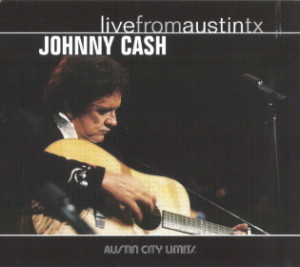 Live From Austin TX was recorded on January 3, 1987 for the long-running public television show “Austin City Limits.”  The 1980s were disappointing times for Johnny Cash in terms of recording.  It wasn’t that he was washed up as a performer.  It’s that he often recorded studio albums full of every conceivable gimmick, none of which has aged well at all.  Some see this as a tension between his early outsider image and the clean-cut family man one that arose from his TV show, something he resolved decisively in favor of the former in the early 1990s with great success.  A straightforward live album like this proves a nice counterpoint to his studio recordings of the 80s era.  There are still some unfortunate electronics slapped on the guitar, but they aren’t too overbearing.  Cash sticks mostly to a “greatest hits live” format, so you know you at least get to hear some great tunes.  He even brings along a horn section for “Ring of Fire” and “I Walk the Line (outro)”.  Shortly before this show, he had been dropped by Columbia Records after almost 30 years.  He then signed with Mercury Records, and some of the songs here are from his first Mercury album Johnny Cash Is Coming to Town, released in April following this show.  Later in 1987 he went into the studio to re-record a lot of his old hits on Classic Cash: Hall of Fame Series, which is minimally adequate but doesn’t have quite the energy of this live set.  No, this doesn’t compare to the famous prison albums of the 1960s, and it’s no real revelation.  But it does possibly surpass anything Cash released in the 1980s, at least for consistency.