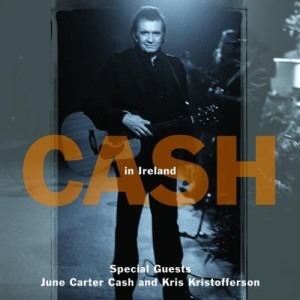 Not everything on In Ireland is terrible, just most of it.  Recorded February 11, 1993 at the Olympia Theatre in Dublin, Ireland, the show was filmed and released first in DVD format, with this download-only album following a few years later.  The show took place just two months before Cash began recording his comeback album American Recordings.  Cash, himself, seems a bit tired here.  His voice isn’t in bad shape, but often his singing is not very enthusiastic and actually rather lazy.  The band — oh boy — is just on autopilot.  They have played these songs about a million times and it seems like they lost interest years ago.  Guitarist Bob Wootton stumbles through almost every song, like he’s only half paying attention.  Drummer W.S. Holland is determined to keep his own beat, regardless of the one everyone else is using.  June Carter seems like her vocal chords are shot from too many years of touring.  Rosey Nix comes across an amateur with a faux-gravelly voice she can’t control well enough.  And John Carter Cash is a pox on the proceedings, with nothing to offer but terrible clichés magnified to try to fill out a stage he doesn’t belong on.  Kris Kristofferson pops in for an okay cameo, but he’s not enough to improve the situation.  Earl Poole Ball is still around on piano, and he’s actually fine, but, like Kristofferson, he’s just not enough of a presence to make much of a difference.  If you want to hear most of the same tunes played with at least a semblance of interest from the band, try Cash’s performance on “Austin City Limits” from six years earlier.  The lethargic reading of “Ghost Riders in the Sky” might be the best thing here.