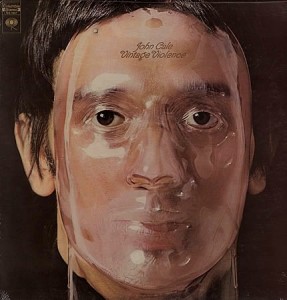 John Cale’s solo debut is shocking. One might have expected some all-out avant-rock akin to what Cale did with The Velvet Underground. Maybe some droning classical compositions like he had recorded with Tony Conrad (later released on the “New York in the 60s” series). Or maybe even something like the albums he produced for The Stooges and Nico. Instead he delivered a Bee Gees Odessa, a Beach Boys Sunflower, or something along those lines at least.

Cale wrote songs with a vast awareness of what he was capable of. Vintage Violence casts the arty ambitions aside and works from scratch.  He conceived and recorded the whole album within about two weeks. What surfaces is a delicate naiveté. The songs are nostalgic. Every word seems to reference a fond, or at least strong, memory.

Rock and roll was a somewhat spontaneous endeavor for John Cale. He had classical training and just fell into to rock and roll with The Primitives (Lou Reed’s fabricated touring outfit that became The Velvet Underground). So he arrived with an articulate, fully-formed identity. But then he fell in love with the whole rock and roll thing. Cale made his rebellion with The Velvets. For his solo debut, he dove into pop music. He was willing to try anything it seems. Yet, he was already enough of a master to anticipate the consequences of every move. There may be sudden shifts and shimmies, but Cale responds to each with careful follow-throughs.

Recording his debut, Cale was still married to fashion designer Betsey Johnson (who was responsible for dressing up The Velvet Underground in their day). Lots of things could be said about that influencing the lush, sophisticated pop of Vintage Violence. You could stack a hundred Neil Diamond albums on top of each other and not have the elegance of John Cale’s compositional grace with pop songs (“Big White Cloud” is worthy of a great Scott Walker song). Certainly something changed by the time Cale was recording abrasive albums like Sabotage/Live and Honoi Soit.

At times the lyrics fall on their face, but anyone who expects otherwise would be the type who would have run into Andy Warhol and expected an engaging conversation (ha!). Then again, songs like “Amsterdam” and “Charlemagne” would make Cale out to be a great lyricist.

Vintage Violence cast no shadow on future projects. Church of Anthrax recorded around the same time with Terry Riley bears no resemblance. This wasn’t the last time Cale dove headfirst into pop music though.

Maybe Vintage Violence works because it throws a brick through the window of the avant-garde. The people inside were so busy throwing their own bricks that maybe this inadvertently got thrown back out.