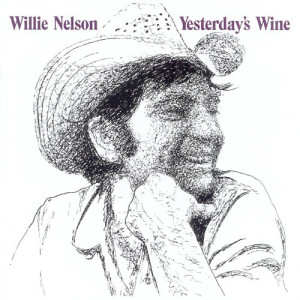 Willie Nelson had a recording session scheduled in May 1971.  He had grown lazy as a songwriter over the years, and he didn’t really have material lined up for the album. The night before recording began (!), he wrote much of the material — at least seven of the songs — that ended up on Yesterday’s Wine.  The result is a major departure from his “typical Nashville” albums of the previous ten years.  This subdued concept album about coming to terms with religion in adulthood strips the music back to spare, intimate settings.  Often there is little more than Nelson’s voice, acoustic guitar and bass, with piano or steel guitar appearing only briefly, even just momentarily.  Although mellower and more laid-back (the Willie Way!), it’s a format a bit like Bob Dylan‘s albums Nashville Skyline or John Wesley Harding (not all that surprising, given that session man Charlie McCoy appears on both Dylan’s and Nelson’s albums).  The singer-songwriter movement sweeping the music industry seems to have had some effect on Nelson.  Recorded with a mix of Nelson’s touring band and a few session men, the album’s experiments don’t fully succeed.  There is a stiffness in the performances, with the backing band often just plodding along — it’s hard to blame them for lack of practice, though, when the songs were written the night before!  Nelson seems tentative in his vocals too.  He’s in new, unfamiliar territory, and he hasn’t entirely sorted out where he’s headed.  His vocals shed much of the crooning style that he relied on so much the previous decade.  The album’s greatest strength remains the excellent songwriting.  Chief among the new songs is the classic road rambling tale “Me and Paul,” written in honor of Nelson’s touring drummer and former pimp/hoodlum Paul English.