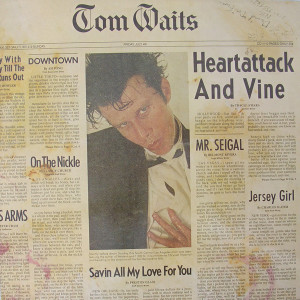 Here Waits is still operating within the realm of orchestrated pop balladry (“Saving All My Love for You,” “On the Nickel,” “Ruby’s Arms”), but he’s made a noticeable change in welcoming more harder-edged blues-rock sounds to his palette, with heavier drums and guitar and no piano (“Heartattack and Vine,” “‘Til the Money Runs Out”).  This proved to be a transitional album as Waits moved toward his edgier mid-80s sound.  But often he is stuck with a slick, “professional”, L.A. kind of sound (“In Shades,” “Downtown”) that is too much of a compromise between the two poles of the album.  Even when he does succeed in one firm style or another, it is hard to find people who want to swing between gravelly crooning and gruff R&B the way this album is presented.  There is definitely good stuff here, but the sum total is a little unsatisfying.  After marrying Kathleen Brennan, whom he met while working on One From the Heart, he basically committed to the style of Swordfishtrombones and stuck with that approach for the rest of his career.