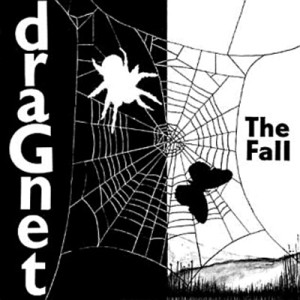 The Fall (named after the Albert Camus book) capture the fundamental beauties of pop tunes with an abrasive attack diametrically opposed to pop’s very essence. The group was active for decades (and still is!) with countless great albums. Fans haggle over their favorite Fall album, but draGnet is indispensable for even casual fans.

Catchy songs crop up everywhere. “Your Heart Out” has an infectious guitar hook. “Flat of Angles” has a familiar riff — like in Chuck Berry’s “Come On.” Certainly, there are reference points; but where pure pop music leaves off The Fall get started. Undiluted expression reigns. The exorcism tune “Spectre vs. Rector” is an often-hailed Fall moment. Craig Scanlon (a future veteran debuting with the band) plays guitar with major echo, out of that rockabilly sensibility of his. The noise focuses the lyrical aggression. The guitar parts often mirror the rhythmic phrasing of Captain Beefheart. Yet, the Fall never succumb to gratuitous or duplicative bullshit. They are too smart to rely on mere devices — they evolve them.

Mark E. Smith heads for the edge of what a rock vocalist can do while singing but one note. At his most blunt, “Dice Man” shows Smith boasting a bit about his position on music’s front lines. Rather than exploring that edge, he dives straight off it. Something new must be better. His trademark squeaky shouts and soaring dynamics are in full-force. The lyrics on the album cover the full spectrum.  Though he doesn’t speak from academia, Smith always challenges ignorance. He may bash show business, but he still wants people to hear him (royalties or not).

Murky lo-fi production combined with Smith’s aggressive lyrics make draGnet the most abrasive album in the group’s catalog (it sounds like they recorded in a warehouse with just one mic in a metal bucket 5 feet from the drum kit). At times, it is also the simplest. A heavy helping of paranoia (“A Figure Walks”) pushes everything forward. It takes time to decipher the convoluted rants but The Fall are worth the effort. Did Smith derive the title “When the Moon Falls” from a Peanuts comic as the album jacket suggests? draGnet sets out the basic impetus behind the Fall. It demystifies their madness a bit, but what they reveal is more brilliant than you might expect.

This isn’t the kind of album just anyone will like (or tolerate). It is a harrowing journey to the extreme. Not every moment is perfect, but The Fall, as always, were at their best in uncharted territory.