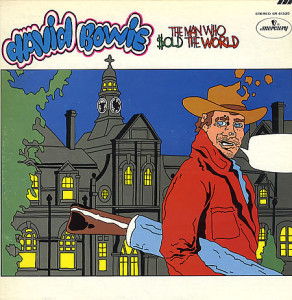 Bowie is still searching for his own sound, and he tries out a wide array of styles here.  He still has one foot in Donovan-like folk sounds (“All the Madmen,” “After All”).  But he also makes forays into Led Zeppelin style hard rock with a blues twinge (“Black Country Rock,” “She Shook Me Cold”).  There are even hints that Bowie could pull off rock opera like he did on Ziggy Stardust (“Running Gun Blues,” “Saviour Machine”).  But what makes this album notable is that it marks the arrival of Mick Ronson on guitar, who would prove the key to Bowie making it big.  Ronson fuels the proto-glam musings of “The Width of a Circle” and the title track with panache.  What separates this from most of what came later is that later on Bowie’s best individual songs had an almost hermetic perfection, with everything so finely tuned that not a single note sounds out of place.  Here things are pretty loose and jammy even.  If the songwriting wasn’t so tentative and uneven this could have really been something.  As it stands, it’s a decent but somewhat undeveloped affair.  Bowie fans will appreciate this most for what it does and doesn’t reveal about what came next.  This still may be the darkest record in his catalog.  Those unfamiliar with Bowie should start elsewhere.