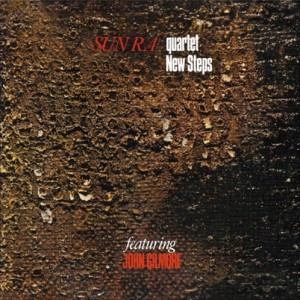 New Steps provides studio recordings from Sun Ra’s late-1970s Italian tour.  This is a small group set, with a quartet featuring Ra on various keyboards, saxophonist John Gilmore, trumpeter Michael Ray and drummer Luqman Ali.  It’s an eclectic batch of tunes, with lots of ballads, one track of intriguing synth experiments (“Moon People”), and a few songs that inhabit space that’s uniquely Ra-like and unclassifiable — blending balladry, free jazz, and afro-futurist exotica.  Gilmore receives special billing on the album sleeve, and he gets a number of nice solo spots, notably delivering a lovely rendition of “My Favorite Things.”  This benefits from being a recorded in the studio (at two January 1978 sessions in Rome) rather than live, for a change.  It probably won’t bowl over the newcomer, but it’s a great album for the fan, especially anyone who liked Some Blues But Not the Kind Thats Blue or even Bad and Beautiful.