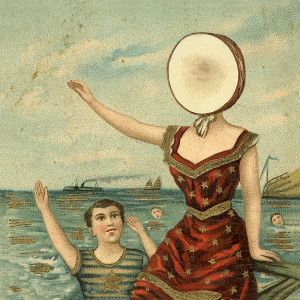 In the Aeroplane Over the Sea is one of the defining albums of “indie rock” in the late 1990s.  It came along after the “grunge” and “alternative rock” moments had passed, and major labels were sort of finished trying to foster anything deeper than manufactured dance pop.  The music relies upon eclecticism.  Although there is a recurrent use of acoustic guitar in a driving folk-rock kind of manner, most of the songs use instrumentation uncommon in “rock” music: accordion, bowed saw, a horn section.  The vocals also develop what was the most recognizable feature in the genre of indie “twee” pop, in the form of off-key, slightly nasal and almost whiny delivery.  When the horns play, they also adopt the mannerisms of the vocals.  They play asynchronously, adding some dissonance and beats to the harmonies.  Although these are carefully crafted affectations, they all add up to something childlike.  This was its defining characteristic.  Many of these song lyrics are about children or childhood.  Putting all this into some kind of context, it was a retreat from dominant culture, to a world of sheltered authenticity and innocence.  It made perfect sense viewed in hindsight.  In the United States, the “baby boom” generation was busy ensuring that the pains of dwindling economic prospects in a globalized world of “outsourcing” fell disproportionately on younger generations and that the benefits of economic bubbles flowed to them rather than to youth as well (the coming housing bubble is a classic example, pricing the young out of home ownership).  Why wouldn’t young adults look back fondly at childhood, when the promise of a standard of living equal to their parents’ generation seemed credible?  In a directly analogous way, in Die Traumdeutung [The Interpretation of Dreams] Freud wrote about how dreams of nakedness without shame staged the fulfillment of a wish to return to childhood innocence.  This is what warbled, untutored “twee” singing (without shame) is about.  So In the Aeroplane pines and yearns in its isolated, self-created world within a world, never really expressing something affirmative other than to distance itself and disavow the surrounding circumstances.  This is exactly what the opener, “King of Carrot Flowers, Pt. 1” is about (“When you were young you were the king of carrot flowers . . . And from above you how I sank into your soul / Into that secret place where no one dares to go”).  Without drums, the sense of isolation is accentuated.  And “Two-Headed Boy,” referring to a kind of freak in a glass jar, marvels at a wondrously monstrous reality separated from the regular world.  When the music seems so fragile that it might fall apart at any second, it rests on fear that just that sort of fracture might happen.  This is sort of a self-defeating approach, because it ends up being kind of complicit in the sorts of things it tries to stand morally apart from.  But, at the same time, it at least represented a recognition that the course was wrong. But that was, in a way, the only achievement.  There are still not many recorded “confessions of a beautiful soul” as evocative as this.