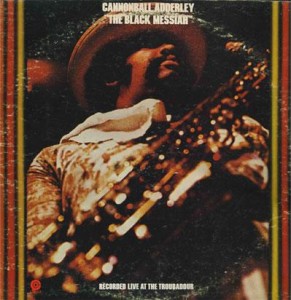 Live jazz fusion album from mainstay of the hard bop era, Cannonball Adderly.  It is refreshing to hear him moving into new areas and adopting a variety of rock influences.  He is joined by a lot of Miles Davis alumni, and no doubt this style of fusion strongly resembles what Davis’ groups were doing up through this period — particularly Nat Adderly‘s playing on cornet (esp. “The Chocolate Nuisance”).  Lee Morgan‘s last recordings would also make a good reference point.  It’s an easygoing record.  If it ends up being a restatement of what others had already mapped out in the fusion era, it remains an excellent summary.  It is just plain likeable. George Duke on keyboards in particular sounds great, even if again he sounds like any number of keyboardists from Davis’ groups.  The main drawback is the prominence of long narrations by Cannonball, which are eloquent but dry, and stretch this to double-album length.  Unlike, say, Rashaan Roland Kirk‘s Bright Moments, there is little showmanship and theatricality in the narrations, making them less of an attraction.