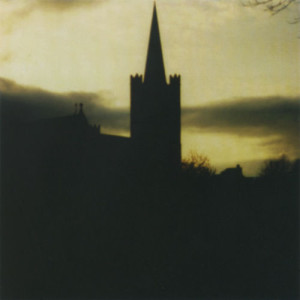 The main thing about Jandek is that the man behind it, Sterling Smith, has managed to come up with some pretty varied music through the years.  Here he enlists the help of some excellent avant-garde players for a live show recorded October 16, 2005 in Glasgow.  The first track, “The Grassy Knoll,” is performed with the great Loren Connors, with Mr. Smith on harmonica and also doing spoken word and a little singing.  The sort of ambient guitar playing from Connors matched with the poetic recitations strongly recalls Patti Smith and Kevin Shields‘ The Coral Sea, part of which was recorded just months before this (was Mr. Smith in attendance?).  But Unlike Patti Smith’s more dynamic recitations, Mr. Smith is more dark and monotone, suggesting influence from John Cale‘s “The Jeweller” (Slow Dazzle) or an assortment of Current 93 recordings.  The lyrics reflect something of a consistent theme in Jandek recordings, that of seeking escape from something like a professional office-type day job — for a similar scenario, see the interview with Runhild Gammelsæter in the October 2008 issue of The Wire magazine, or even read about the life of composer/insurance executive Charles Ives.  It might be summed up in a line from the Godard movie Film Socialisme: “No more doing evil, it’s vacation time.”  The second track, “Tribal Ether,” is even better.  Mr. Smith is on….drums!  Alan Licht is on electric guitar and Heather Leigh Murray is on lap steel guitar and some vocals.  The guitar cooks and the drums, well, they strangely enough work.  But with Jandek, strange is the new normal.