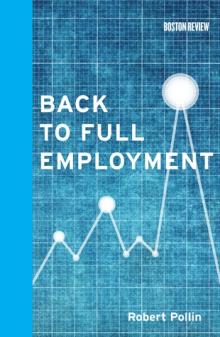 Robert Pollin’s Back to Full Employment is a short book meant for general audiences (not just professional economists) advocating an economic policy shift in the United States towards one promoting “full employment”.  He goes into some detail about what he means by “full employment”, referring to an abundance of “decent jobs”.  The idea of decent jobs in turn relies on Lawrence Glickman‘s definition of paying “a wage level that offers workers the ability to support families, to maintain self-respect, and to have both the means and the leisure to participate in the civic life of the nation.”  The basic thrust of Pollin’s argument is that neoliberal austerity policies must be abandoned.  Instead, policies that benefit society at large should be pursued.  As one reference point, he trumpets the success of pro-labor policies in Sweden since WWII, without really acknowledging how the Swedish labor coalition has largely fallen apart in recent decades and shifted toward the sort of austerity policies Pollin criticizes (though it staged a small comeback since the publication of Pollin’s book).  Pollin glosses over explaining what neoliberal economic policies are really about — favoritism for financial interests over labor.  But it remains clear that he favors employment policies that benefit the majority of the population, especially people unable to find any work or work that supports a dignified existence.  This is sort of a counterpoint to Tyler Cowen‘s The Great Stagnation (2011), which advocated a kind of doubling-down on austerity measures.

After setting out why he believes full employment is possible, he lays out some discrete policy objectives to promote full employment.  This is where the book falls a bit short.  For instance, he argues that dollars spent on teaching and a green energy economy will provide more jobs per dollar than those currently spent on oil & gas or the military.  However, jobs retrofitting existing infrastructure for “green energy” seem temporary — what happens when existing buildings are all retrofitted?  Moreover, “A Green New Deal conceived as tampering around the edges of industrial capitalism— employing the un- and under-employed to manufacture solar panels and batteries for electric vehicles, would add to carbon emissions and other environmental harms at a point in history when the collective ‘we’ can’t afford it.”  The other problem is that the data is very, very limited.  Only a handful of job sectors are discussed.  What will the rest of the populace do?  He also opposes trade protectionism (“trade nationalism”).  While admitting that data on this is “mixed”, he alludes to looking only at the last 35 years.  Because the neoliberal project has been around 40 years, he doesn’t seem to be looking at a relevant or long enough period.  One would really need to compare the protectionist era.  Michael Hudson did so in America’s Protectionist Takeoff 1815-1914 (2010), and Hudson has argued that protectionism has historically been a critical policy for all successful industrialized economies.  Pollin may lack data for his conclusion, but he does make an interesting (albeit conclusory) moral argument that success in the United States shouldn’t come at the expense of the well-being of people in other countries — a rejection of beggar-thy-neighbor policies and national chauvinism.

Pollin says that there should be requirements to prevent banks from “hoarding” reserves, and a financial transactions tax should be implemented.  In many ways, Pollin is pushing Keynesian measures.  But, there are many people suggesting that such policy measures would have the opposite effects on employment than Pollin suggests.  In other words, he seems to be making unwise policy recommendations, even if you agree with his goal of providing “full employment”.  The first problem is the bank “hoarding” argument.  In essence, he is saying that banks are holding too much reserves and should be more highly leveraged!  People like Ole Bjerg, Nobert Häring & Niall Douglas, Michael Hudson, Martin Wolf and the UK Positive Money initiative have instead suggested implementing a 100% reserve requirement on banks.  This is an old proposal.  The Nobel prize-winning chemist Frederick Soddy proposed it long ago, and the conservative economist Irving Fisher later picked it up (many economists credit the idea to Fisher, even though Soddy — not an economist — clearly articulated the proposal first).  Pollin takes the standard Keynesian view that a lack of aggregate demand is the problem the economy faces today.  But what he overlooks is the problem that Bjerg states most clearly: a dominant ideology that sees “being in the market” as the only legitimate socioeconomic policy, which naturally leads to excessive speculation.  Any change in “aggregate demand” that leaves in place the ideology behind neoliberal austerity policies is bound to revert to the same problems at some point.  A more effective half-measure would be to create public banking options alongside private ones, as advocated by people like Ellen Brown and already present in the state of North Dakota.  Of course, speaking of full measures, it has been said before that “To talk about ‘regulating economic life’ and yet evade the question of the nationalisation of the banks means either betraying the most profound ignorance or deceiving the ‘common people’ by florid words and grandiloquent promises with the deliberate intention of not fulfilling these promises.” Left untouched, too, are proposals supported by people like Ralph Nader to repeal the Taft-Hartley Act and reinstate the Wagner Act.  These sorts of things would throw real power behind labor, as a countervailing force to parasitic financial interests. Or instead of supporting the Dodd-Frank Act, and debating the effects of its loopholes and limitations as Pollin does here, which have since been subject to further repeals, why not fully restore the Glass-Steagall Act as Elizabeth Warren proposes?

Pollin also argues for a financial transaction tax.  While superficially appealing, this doesn’t seem to solve all the underlying problems.  For instance, real estate speculation could potentially survive such a tax without impact.  A more robust solution is the one Michael Hudson advocates in The Bubble and Beyond (2012).  Hudson states that capital gains taxes must be at least as high as income taxes on labor.  This would seem to exactly fit Pollin’s goal of promoting “full employment” because it would take away tax incentives that promote absentee ownership over labor.  Pollin claims credentials undoing damage from Jeffrey Sachs‘ austerity policies in Bolivia.  Hudson has those credentials too, from work in Latvia.  Hudson’s views on tax reform seem more wide-reaching though.  Of course, it would be possible (and perhaps desirable) to enact both proposals.

Lastly, Pollin argues that decreases in healthcare and military spending will not undo the benefits of a “full employment” program.  The military prong is the one that should raise eyebrows the most.  Pollin perhaps underestimates how dollar hegemony as the world’s reserve currency is a policy enforced down the barrel of a gun, with a long history of the United States invading or sponsoring coups in countries whose governments fight that paradigm.  Rob Urie, Michael Hudson, William Blum, and others have explored this.  When Pollin argues that the United States can provide “full employment” while at the same time reducing military expenditures, his argument seems suspect.  Hudson’s famous Super Imperialism book explores in much greater depth how U.S. financial dominance was always a veneer over a threat of military action.  And Ernest Mandel has offered a detailed explanation of how imperialism is a kind of release valve for the natural tendency of purely domestic profits to decline.  While it does seem that the United States should reduce its military belligerence, it does not seem that the nation can do so and provide “full employment” in the long term without eliminating its trade deficit, counter to Pollin’s suggestion.  It is a question of changing a bunch of variables simultaneously that all prop up the shaky foundations of dollar hegemony, and, admittedly, isn’t an easy thing to assess definitively.  Though Mandel’s application of Marxist economics shows how abandoning imperialism will undoubtedly result in a decline in profits, because that is how capitalism works.

In the final analysis, Pollin’s ideas are meant to reform capitalism, putting a happier face on it.  He sticks with a growth model, without much consideration for critiques of the growth imperative raised by ecological economics and anti-capitalist leftist commentators.  Much of the problems he identifies could be eliminated by nationalization.  This is most apparent in the healthcare area.  He doesn’t advocate abandoning capitalism, even though many of his suggestions point in that direction.  His ultimate policy object, promoting “full employment”, seems like an important one.  Yet it’s hard to see how his program of trying to make political compromises leaves sufficient policies on the table.  Pollin’s specific policy prescriptions seem to have too many limitations and loopholes to be effective.  Some might even be counterproductive to the goal of full employment.  He confines himself to mostly tinkering at the edges to mitigate harsh symptoms without addressing the root causes.  Real questions of the adequacy of his suggestions remain, considering that versions of these suggestions were tried during the New Deal era and were ineptly handled or were simply too limited to be effective.  And that’s just assuming that there really would be political will to implement Pollin’s recommendations!  He is not willing to acknowledge the limits and limited applicability of Keynesian economic theory—he is really just someone with Keynesian economic policy prescriptions in his pocket in search of “problems” to justify dispensing those prescriptions.  But he’s at least raising many of the right questions.  It is undoubtedly necessary that a critical mass of people start asking the sorts of questions Pollin has broached with Back to Full Employment.  However, it seems absolutely necessary to ask deeper questions too, and demand much more.