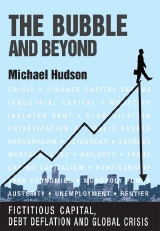 Michael Hudson – The Bubble and Beyond: Fictitious Capital, Debt Deflation and the Global Crisis (ISLET 2012)

If you have time for just one economist today, Michael Hudson would make an excellent choice. The central premise of The Bubble and Beyond is that “the miracle of compound interest” has for all time tended to exceed growth of the “real” economy, which invariably leads to excessive credit claims that cannot be paid. He cites Richard Price‘s famous example of how a penny invested at 0 BC with 5% compound interest would have by Price’s time (1772) become a solid sphere of gold reaching to the orbit of Saturn — obviously unpayable!  Part of the problem today lies with the self-serving tendency of mainstream economics to exclude analysis of finance (particularly the closely-related finance, insurance and real-estate or “FIRE” sectors) from the analysis, which Hudson attempts to incorporate into a more inclusive model. All past economies (excepting ancient Rome) burst such financial bubbles to wipe out bad debts. But Hudson has shown that the ongoing financial bubble organized by the Washington Consensus (Alan Greenspan being the most recognizable face of the phenomenon) has resisted debt write-downs by fueling further debt pyramiding (paying debts with more debt). Building on his landmark book Super Imperialism (a must-read), he shows how the Washington Consensus has adopted tactics not unlike those of a suicide bomber, threatening to destroy countless economies if demands (from the USA, the world’s largest debtor) are not met. But further, he does not shy away from illustrating how countries that do not toe the line are routinely invaded by military forces or subject to “color revolutions”. Hudson is spot on in his analyses, in a way that is refreshingly accessible, reasonable and reliable. He provides summaries of the history of economics that demonstrate how many of the concepts he is now restating have been known — if marginalized — for centuries. Yet many past writers could not have anticipated the sheer magnitude of the present bubble economy, or the ways in which vested interests would successfully stave off reasonable solutions. Much of the problems revolve around tax policy, in Hudson’s view, with a clear need for a more progressive income tax, especially with higher rates for “capital gains”. Oh, and there is a need to deal with financial fraud too, by sending criminal banksters to prison. But those policy prescriptions have a successful history in modern Western states that debt write-offs do not enjoy. It is there that Hudson goes the extra step. He says bankers need to take a loss on bad loans, and he backs up that claim with historical examples that go back to earliest recorded history in Mesopotamia.  This historical grounding demonstrates that current tactics are fundamentally inadequate, from the historical perspective.  There lies his most important contribution.  He provides context for the way dominant think today deviates from accepted wisdom of the past.  This allows the reader to step outside the economic paradigm of the present to envisage another, more stable and equitable one.

This is a good book, and an important one. But due to the importance of the topic, it is worth pointing out a few areas where the book is lacking — or simply where a second edition could make some simple improvements. First, as many other reviewers have noted, this book is basically a self-published collection of materials from pre-existing articles. As always follows in such cases, the editing and proofreading is abominable, with typos, duplicate paragraphs, and tedious repetition endemic throughout the book (particularly where disparate articles were making the same or very similar points). This man deserves a good editor!! Second, there is a general lack of adequate citations. Hudson spouts off numbers without revealing where they come from, and talks about things like the ancient Roman economy while only mentioning historians like Plutarch in passing near the end, many chapters later. Of course, there are portions of the book that include a rich set of citations, and those wonderful efforts cast somewhat of a pall on the chapters that lack them. Moreover, he talks about things like bank “keyboard credit” without adequately explaining his use of such terms (Norbert Häring and Niall Douglas’ Economists and the Powerful does a superior job explaining that point, for instance). Third, Hudson gets bogged down in a bit of a “sour grapes” tone when deriding mainstream economics, particularly the “Chicago School Monetarists” like Milton Friedman. Hudson is absolutely right that those mainstream schools of economic thought are really no more than lobbying efforts on the part of financial interests, not objective “science” or anything approaching it. But the endless repetition of the accusations does get tiresome, and what would have had quite an impact in a single chapter gets dulled somewhat when revisited over a dozen or more. It also would have been interesting if Hudson elaborated on the ways ignored economists like Frederick Soddy and Thorstein Veblen wrote about many of these exact same topics 80-125 years ago (he occasionally refers to his other books when discussing Simon Patten, but few besides Patten get adequate treatment in these pages). Moreover, while Hudson laments how the economics discipline has been hijacked by hacks shilling for Wall Street, he doesn’t really explain why a sociologist like the late Pierre Bourdieu could write a microeconomics book like The Social Structures of the Economy that dovetails well with Hudson’s macroeonomics. Why continue to think in terms of the narrow confines of provincial, silo-ed academic specialties, thereby reinforcing them?

Minor flaws aside, this is the sort of work that better deserves the attention lavished on Thomas Piketty‘s Capital in the Twenty-First Century. At the least, readers should investigate some of Hudson’s articles for Harper’s Magazine (incorporated into the book), which provide some important general summaries, or read up on the citation-rich chapters showing how Karl Marx repeated claims by protestant reformer Martin Luther that are even omitted from anthologies of Luther’s works! There’s a host of valuable material here and the world would be a better place the more widely its concepts were known.