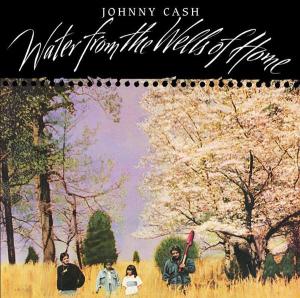 Cash made some real stinker albums through the 1980s.  Often this was the result of lunging from one producer to the next, trying to pair him up with whatever style seemed like the most commercially viable fad that year.  Water From the Wells of Home was a little different in that Cash actually spent an extended period of time working on the album, instead of his usual practice of pulling together songs, relying on the producer to find a “sound” for the album, and then showing up and doing the actual recording in a brisk fashion.  The album also employs what would be a growing trend for aging stars: enlist guest performers to try to draw in new audiences.  For all that effort, the album is still pretty mediocre.  Cash is clearly putting in more work to his singing than he had in a while, and most of the guests give this a real go.  The production style is clear and crisp, without a lot of obvious gimmickry, so it has aged a little better than some other 80s efforts.  But the backing band provides only the most hackneyed, nondescript support, to the point that this often feels like a karaoke session.  Then there is the title track, a duet with Cash’s son John, which is really dreadful.  So this album isn’t particularly successful, though it showed the potential still locked in Cash’s rich baritone voice, now a little older and coarser.  In many ways, this was the album that set the stage for Cash’s American Recordings comeback in a few years, by keying in to his voice in a more direct and unencumbered way, letting the man sing what he likes without being beholden to some trendy country subgenre that didn’t quite fit.  What remained, though, was to strip away the unnecessary guest spots, and get rid of the horrible backing band.  Rick Rubin would realize this shortly, and make it happen soon enough.