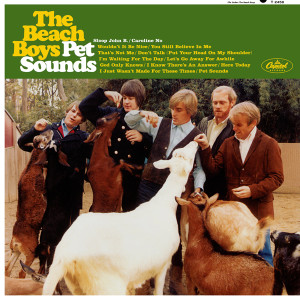 This is the album against which every other pop album is judged. A work of studio genius put together by Brian Wilson, Tony Asher and The Beach Boys, the reputation of Pet Sounds needs no repetition. It raised the bar as to what an album of songs could be as a unified work. Pet Sounds is the essential coming-of-age masterpiece.

Innocent and charm is what makes The Beach Boys so widely appealing. Tony Asher’s lyrics are full of hope in the way they present the doubt of confidence and the confidence of doubt. Often songs describe the highs and lows of a adolescent love. What sets Pet Sounds apart is the complete, though imperceptible, avoidance of escapism (inevitably encountered in the institutionalized American education system). At some point everyone can appreciate the loving, natural world this music represents. Ditching school (or work) to surf, drag race, or fill-in-the-blank is universally appealing as kids stuff goes, but eventually you reach a place like “Caroline No.”

While The Beach Boys went through many turbulent comebacks and personal conflicts, Pet Sounds survives as a perfect fragment of their potential. The first albums I ever bought were two discount Beach Boys compilation tapes I got at a bookstore. Along with a hip-hop album I copied from a friend, this was the extent of the music I listened to for months, well years really. I wasn’t allowed to watch MTV and for some reason I didn’t listen to the radio ever—probably because no one else at home did. Right around junior-high-time I decided I was too cool for The Beach Boys. I shoved the tapes into the back of a closet and out of mind. Only years later as a college DJ did I give them another chance. They were considered one of the all-time great groups after all; I had to listen. It was a slow process but I came to appreciate all that The Beach Boys represent. They functioned as a metaphor for an innocent childhood I could look back on. Rediscovering The Beach Boys had a deep meaning for me. They don’t paint the picture of a perfect world, but one with a full range of emotions and experiences. “That’s Not Me” is just one of my favorite songs. Brain Wilson begins with long, smooth organ chords then places the vocals in the same groove, broken only by the incessant taps of a tambourine.

Brian Wilson was the 1960s’ rebel without a cause. The Beach Boys may not arrive anywhere particular, but all that matters is that they flail around for a while. The point is Pet Sounds is a coming-of-age story told while it was happening. Completely authentic.