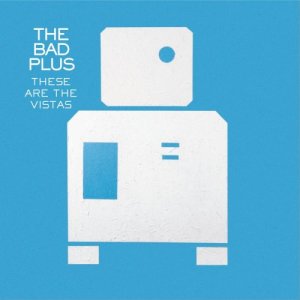 A frequent comment about Bad Plus albums is that if you’ve heard one you’ve heard them all.  That’s mostly true.  But it’s also true that These Are the Vistas is head-and-shoulders above any of their other recordings.  The sound is often called “acoustic fusion”, which really means they play acoustic instruments with a traditional jazz style and sonic texture but focus on rock-oriented rhythms.  Think “Eighty-One” from E.S.P. by Miles Davis‘ second great quintet, when they were just starting to feel out how rock and jazz could meet.  The Bad Plus update what Davis’s group was doing considerably, by bringing to the table the sound of modern rock, as with covers of the likes of Nirvana and Blondie.  There is a more contemporary ironic touch to it all.  While it can sound a bit glib and formulaic elsewhere, the group probably never has and never will match what they documented here.