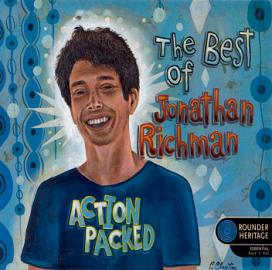 If Buddy Holly had arrived in the punk era, he might have sounded something like Jonathan Richman.  The material collected here leans on bubblegum pop but with an ironic, half-serious delivery.  These are like children’s songs played in a way that has no appeal to children.  When it’s just Jonathan with a guitar, which is most of the time, the music could pass for that of some guy at an open mic night playing solo versions of old rock/pop songs and making up a few new ones as he goes too.  That might not sound all that interesting, but it all ends up being quite endearing because Richman is so convincing and earnest.  He doesn’t put across shy, introverted attitudes as better than anything else, just as something that belongs in the conversation with all sorts of other great music.  His songwriting PWNS that of Rivers Cuomo of Weezer (a band that is quite similar, if much less talented, with just the rock sound of The Feelies tacked on top of something that does kind of suggest a sort of superiority of the geeks).  A lot of people will just scratch their heads at this–even if they were intrigued by Jonathan’s appearance as a strolling troubadour in the film There’s Something About Mary.  But those with a soft spot for lovable losers and insecure geeks, or simply clever, quirky and goofy songwriting, welcome home…gabba gabba.