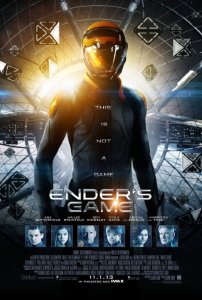 What a piece of garbage.  This film (based on the book by Orson Scott Card) tries far too hard to incorporate teen and pre-teen appeal, aping Harry Potter, The Hunger Games, and The Troll Twins of Underbridge Academy.   The plot is stupid and the characters implausible.  There are many pseudo-intelligent plot devices that are not even a fraction as intelligent as the filmmakers apparently think them to be.  The main character Ender (Asa Butterfield) is closely scrutinized by military superiors who see potential in him.  Yet they go so far as to extrapolate the future of humanity from a five-minute schoolhouse incident in which Ender gets into a fight.  The pop psychology is laid on very thick.  It might have been tolerable if it had any sort of connection to legitimate psychology.  It doesn’t.  Again and again, nothing really adds up.  Why are there a total of four adults in the international military that is trying to save the Earth from aliens?  And why are children, and only children, necessary to their plans?  None of that is explained.  The main character is portrayed like some kind of savant of sorts–recalling Herman Hesse‘s Magister Ludi [AKA The Glass Bead Game].  But there is little attempt at Hesse’s sense of irony.  The film gets a little better at the end, when it tries to find a moral center.  But the ending winds up being much the same as Starship Troopers (1997).  Skip this.