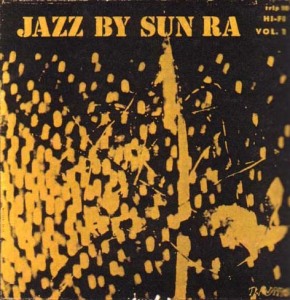 Sun Ra didn’t start releasing recordings as a leader until he was well into his forties, making him somewhat of a late arrival–like Sam Rivers or Bill Dixon.  Recorded for Tom Wilson‘s Transition label in 1956, Jazz By Sun Ra, Vol. 1 (later issued as Sun Song, the CD edition of which Includes the bonus track “Swing a Little Taste” from Jazz in Transition) is made up of the type of skewed big band music featured on Jazz in Silhouette and a smattering of other recordings The Arkestra made in Chicago but did not release until they had relocated to New York City in the 1960s.  As an album made specifically for a willing record label, this sounds quite a bit more hi-fi than the many rehearsal tapes from the same time period released on El Saturn records in the coming years.  As for the music, it’s all quite good.  The Arkestra sounds very polished.  Some great songs too, with Sun Ra’s arrangements giving this an adventurous feel.  The harmonies were advanced and novel for the day.  Hindsight may not make this seem all that innovative, given what came later, but you wouldn’t have found solos like John Gilmore‘s on “Brainville” or “Future” anywhere else in 1957 (save perhaps Jazz Advance).  The prominent percussion on “New Horizons” and “Street Named Hell” were also rare in a jazz context when this came out (though Buddy Collette and others had similar notions).  Then of course there is the closer, “Sun Song”, on which Sun Ra’s organ gives a big hint as to where he would go in the next few decades.  This album is pretty consistently good from beginning to end.  Sun Ra and his Arkestra may have made even better recordings, but this still ranks among their most listenable efforts.