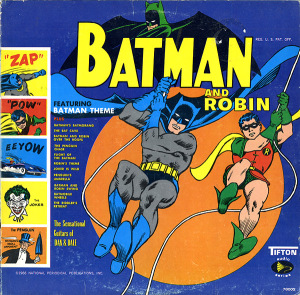 Batman and Robin is a fun novelty item.  Credited to “The Sensational Guitars of Dan & Dale,” it was the product of a one-off session organized by renowned producer Tom Wilson that paired members of The Sun Ra Arkestra with members of the rock group The Blues Project.  The record was released by a toy company.  It was designed to cash in on the popularity of the “Batman” TV show.  The band simply runs through some dance-rock jams in a Swinging Sixties style, with plenty of wild blues rock guitar riffs and some elements cribbed from Euro-classical music and The Beatles.  The horn charts are simple, bright and punchy, not unlike the style of Jamaican ska.  Some claim Al Kooper is featured on side two in place of Sun Ra, but Kooper has denied being present and it’s more likely Sun Ra throughout.  This was arguably the most accessible album Sun Ra ever recorded.  Don’t look to this for any special insights into Sun Ra’s compositional or performance styles.  The Blues Project folks have equal input it seems.  There are still some very subtle Ra-like moments to be found, as when the band drops out for a few seconds most of the way through “Batman Theme” to spotlight a wall of sound from Sun Ra’s Hammond B-3 organ. “Robin’s Theme” is a good one.