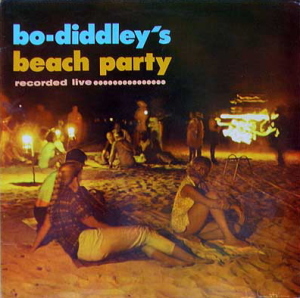 Consider Bo Diddley’s Beach Party the first great live rock and roll record.  It was recorded in July 1963 in Myrtle, Beach South Carolina.  Recording technology was not really advanced enough to permit on-location live recordings of amplified rock bands to have anywhere near the fidelity of studio recordings of the day.  So, this one is pretty lo-fi.  But damn if Bo and his band — just Jerome Green and Norma-Jean Wofford — don’t rip the place up!  Bo is a huge ball of energy.  His screaming vocals on songs like “I’m All Right” are pretty fierce.  Just listen to the guitar on a song like “Mr. Custer” too.  You could almost slip it onto The Blow Up from more than 15 years later and it would still sound contemporary.  It’s really the raw and cutting guitar that makes this one so special.  Apart from some of the hits, which are frequently played at breakneck speed, Bo manages to tear through such unlikely material as “(On Top of) Old Smokey” as an instrumental and make it cook.  It was a few years before live rock records came close to this one, and then mostly from West Coast acts able to tap into the latest technology.  It’s records like this that make people fall in love with rock and roll.