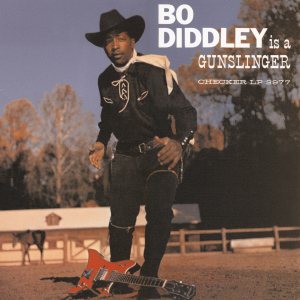 I will repeat a line someone wrote about Sly‘s A Whole New Thing that Bo Diddley Is a Gunslinger is also one of the most exciting mediocre records ever.  It was recorded in gloriously crude and primitive fashion in Bo’s home studio in Washington, DC.  The effect is a little like having him playing in your living room, which is so small the backing singers have to be in the next room — that’s how quiet they sound on the opening “Gunslinger.”  There are plenty of flubs, a lot of off-key singing and a pervasive do-it-yourself feel to this music (there is a superior version of “No More Lovin'” on Rare & Well Done complete with someone coming into the room during recording to announce “I’ve got your hamburgers.”).  While hip-hop eventually turned to gangster and thug life topics, in its early days it was proudly focused on trivialities like sneakers and how parents didn’t understand.  It was a transformation with parallels in rock ‘n roll.  Gunslinger sounds very much like the early rock ‘n roll era with fun, frivolous topics carried on by pure energy…and Bo’s raucous guitar.  You can put this album on for anybody, and they’ll get it.  And they’ll probably smile too.  Nobody can make a record like this anymore without resorting to parody.  But that’s just because there never was and won’t ever be another like Bo Diddley.