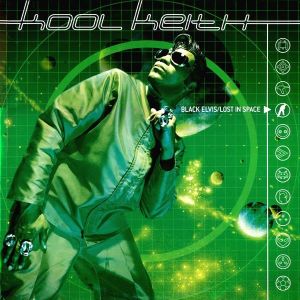 This is, without question, one of my favorite hip-hop albums.  Kool Keith is inimitable.  Maybe that’s partly because there is (or was) hardly anyone even attempting his kind of abstract, surreal vision of hip-hop.  This solo release came somewhat on the heels of the critically lauded Dr. Octagonecologyst album.  It seems like a lot of people like to talk about how Black Elvis isn’t as good as the Dr. Octagon disc.  Well, motherfuckers, I’m gonna say the exact opposite.  I think in every way that counts, Black Elvis is the better album.  On Dr. Octagonecologyst, Keith’s vocals are relegated to a decidedly secondary position.  Just listen to “3000” to hear producer Dan “the Automator” Nakamura chop up the vocal tracks and–subtly–undermine the natural rhythm of Keith’s vocal delivery.  Now, The Automator is okay.  I’m not convinced he’s that great though.  But I am convinced that Kool Keith is a motherfuckin’ rap genius.  To take anything away from Keith’s vocals is, in my opinion, a big mistake.  Now, there’s the Black Elvis album.  It begins as kind of concept album, with Keith’s alien Black Elvis character descending to Earth and rapping about all that he sees from the point of view of this outsider rock star.  I mean, the “Intro” track alone is one of my favorite hip-hop songs.  Then it transitions to some songs that reveal the Black Elvis character to be just that, a public persona…he’s a guy that has to go home and live a life like everybody else.  The end of the disc (which might benefit from trimming a few of the lesser tracks) goes out with a bit of a whimper on some pretty “normal” tracks.  But that’s nothing really.  Through it all, the focus is on Keith and his vocals.  In that respect it corrects all the errors of the Dr. Octagon project (“Rockets On the Battlefield” even claims this is “better than Octo”).  Plus, the electro beats make the perfect foil.  I would go so far as to say this album has no direct precedent in hip-hop.  Some of Antipop Consortium‘s albums like Arrhythmia follow in its path, but even then, there weren’t even many people following up on what Keith did here.  It’s just completely left-field hip-hop.  The lyrics are loaded with the kind of hilarious non-sequiturs I adore:

Keith’s disfigured, amplified vision is just so incisive and insightful here that it gets me every time.  No, this isn’t a perfect album.  But I love it.  I wish more people, including Keith himself, would step up and try to make more hip-hop this daring.  Outside of a few acts like Antipop Consortium, Sole, cLOUDDEAD, MF Doom (and aliases like King Geedorah), few have made the effort.