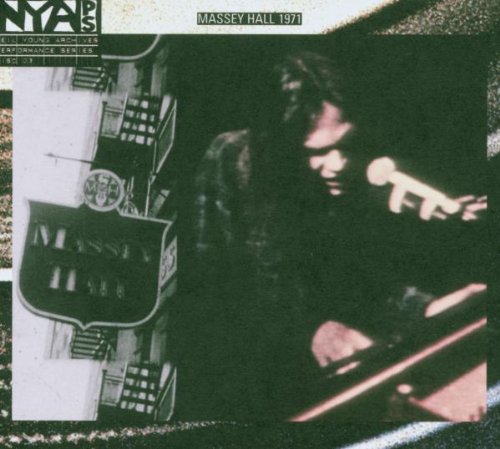 Neil Young’s career reached its peak around the early part of the 1970s.  He has kept on recording and performing long past that time of course.  In his later years it would seem that it became more of a challenge for him to maintain a necessary level of interest in his music.  That’s nothing new really.  Most rock stars of the 1960s that kept on going faced the same challenges–Bob Dylan comes to mind immediately.  Young faced the challenge in his later years by jumping between styles.  In the 1980s, this meant a lot of albums that flirted with various genre experiments, from krautrock (Trans) to vintage 50s rock-n-roll (Everybody’s Rockin’) to contemporary country (Old Ways) to modern hard rock (Landing on Water) to blues/R&B rock (This Note’s for You).  Still later, into the 2000s, he kept jumping between different styles, sometimes at album length but more often within the space of a single album.  While that kind of approach may have helped Young maintain an interest in his music (just like how Bob Dylan amuses himself by radically reworking his old songs in his late-career concerts), it doesn’t always translate into great music.  Now, it does help.  It just doesn’t always produce something that reaches the heights of Young’s best work.  It may elevate Young’s own interest enough to keep him plugging along, but it isn’t always conducive to a burst of inspiration that produces profoundly memorable music.  So listeners of Young’s late career material should expect music that is sturdy and enjoyable, but rarely amazing.  But that’s life.  Artists can’t always give that much of themselves to their music over an entire lifetime.  With music, listeners need to find smaller and more narrowly-defined pleasures in a particular artist’s music to follow along over the long term.

One other thing that Young has done in his later years is an ongoing Neil Young Archives project (Vol. 1 (1963–1972) being the first part), where Young goes back and digs out and presents archival recordings.  While this may seem like something only for his most dedicated fans–and that’s true in the most direct sense–it also offers a chance for live recordings from his most vital period of his career to finally see release.  If and when the performances and songs are good, there is the chance that the music can appeal to more than completist fans.

Live rock records have an awkward history.  For some rock groups, live recordings simply reproduce studio efforts, with sometimes sloppier performances, reduced recording fidelity, and added crowd noise.  Those kinds of records don’t offer a whole lot.  But other groups do things in concert that can’t be captured in a studio recording.  Groups that improvise can offer vast variations on the same material over the course of different live performances in a way that is unique from any single studio version.  Also, sometimes live recordings can offer a chance to hear new (if pre-planned) arrangements of familiar material, like a solo acoustic version of a song that was recorded with a full electric band on the issued studio version.

Live at Massey Hall 1971 was released as part of work on the Neil Young Archives project.  It’s an excellent record.  It captures Young just after he released his amazing After the Gold Rush album (probably his very best) and just before the release his most commercially popular album, Harvest.  He is featured in a solo acoustic setting.  This allows him to present new arrangements and new contexts for what are really some of his best songs.  Young is at the peak of his powers.  Many of the songs he previews from Harvest sound almost superior here free from studio embellishments.  While no, this isn’t the place to start with Neil Young, it is a very important release for admirers of his music and a worthy collection of fresh live renditions of some amazing songs that capture the confused sensations of hope, fear, wonder and longing brought on by what seemed like new found freedoms and the paralyzing responsibility of figuring out what to do with it.