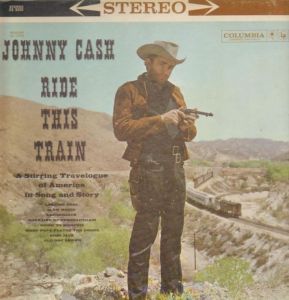 When Cash signed to Columbia, one of his two initial requests was to do a concept album (the other being to do a gospel album).  Ride This Train is a concept album built around stories and songs about American working people of the Nineteenth Century, the places they called home, and their exploits and travails.  The album features spoken narrations by Cash set to sounds of an old coal-powered steam train interspersed among songs with generally spare, acoustic musical accompaniment.  The approach is modeled on the format of old radio shows.  Cash is acting.  Looking back over 50 years later, the closest equivalent would be the radio variety show A Prairie Home Companion, with a lot less emphasis on comedy.  As these kinds of albums go, this one ain’t all bad.  The stories are kind of intriguing and all of the songs are very nice, though Cash may have done a little better with the same basic format on Sings the Ballads of the True West.  Here, he stretches a bit far in trying to portray some sort of authentic aura of the old west, lapsing into the role of amateur archivist or anthropologist. This is far from essential Cash and will be enjoyed most by established fans and listeners interested in something along the lines of musical theater.