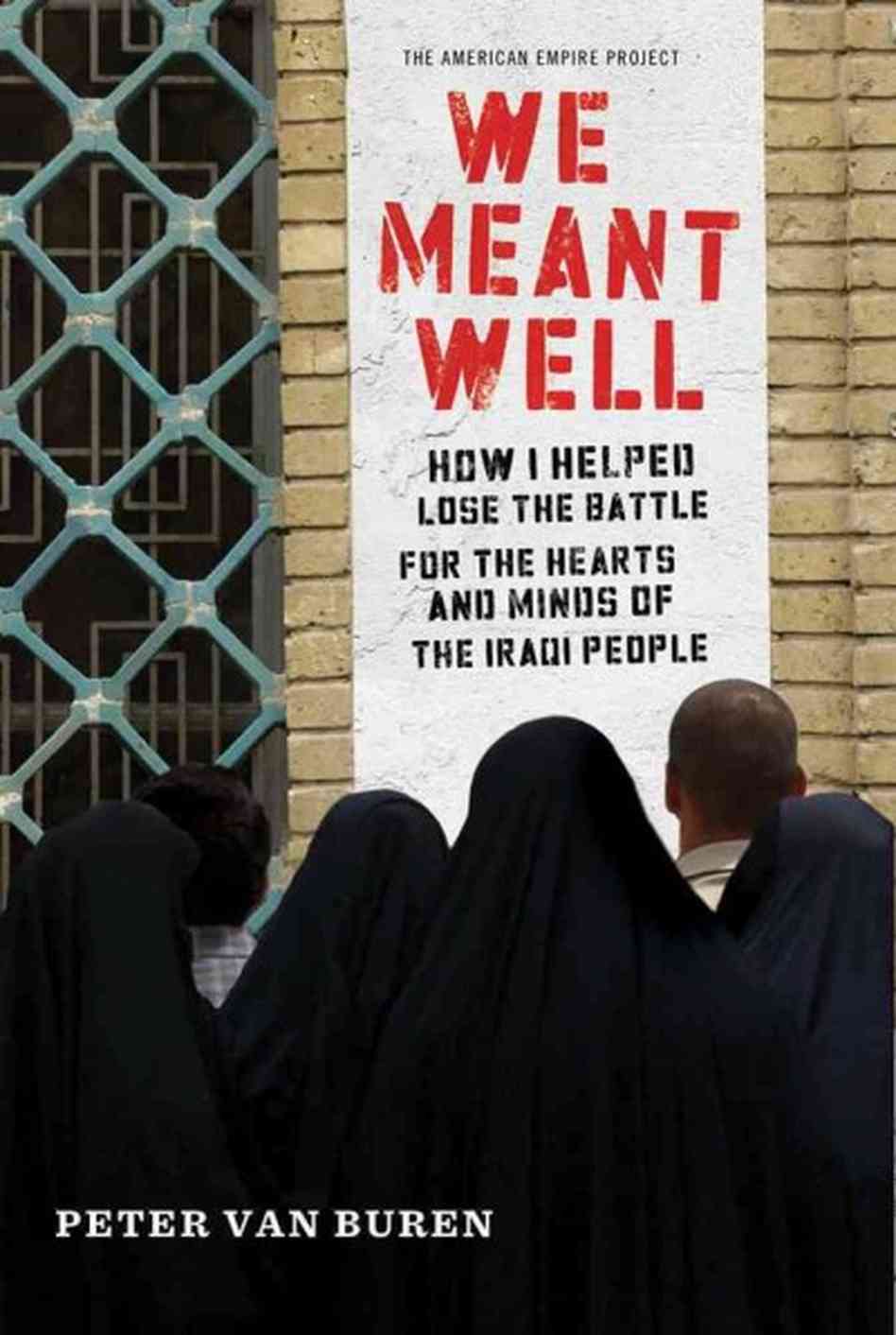 Peter Van Buren – We Meant Well: How I Helped Lose the War for the Hearts and Minds of the Iraqi People (Metropolitan Books 2011)

The United States invaded and conquered Iraq in 2003.  Then, “resonstruction” began under the U.S. occupation that followed.  Supposedly.  Peter Van Buren was a long-time U.S. State Department bureaucrat gently coerced into a year-long sting on a State Dept. reconstruction team in 2009-2010.  He wrote this memoir about the experience — doing so, naturally, caused the U.S. government to initiate legal proceedings and various other forms of harassment against him to suppress what he had to say and intimidate others who might also try, but with the intervention of civil rights group that merely his departure from the State Dept. with retirement benefits intact.  That puts him somewhere on the spectrum of contemporary whistleblowers that includes the likes of Thomas Drake, Edward Snowden, Jeffrey Scudder, and others (see The United States of Secrets on PBS’s Frontline for an excellent overview of the war on whistleblowers).  But the book is out, and it’s a refreshingly independent-minded view of the war, the reconstruction, and what it meant to be a foreigner on the ground in Iraq in 2009-2010.  Van Buren has taken cues from Vietnam War-era reporter Michael Herr‘s book Dispatches.

Van Buren clearly takes the view that the highest levels of political leaders during the Iraq occupation and reconstruction were at best incompetent fools, and at worst malevolent fiends, mostly interested in fabrication illusions of “great accomplishments” with absolutely no regard for reality or collateral damage.  Just below them, the upper crust of military and State Dept. leadership are portrayed as largely gutless hacks most interested in self-promotion and careerist advancement up the chain of command.  Then there are the lower levels.  The civilian grunt workers are mostly a ragtag batch of borderline con artists and unqualified imbeciles gathered up for the job in a rush who often mean well but in a vacuum of real leadership lack any mechanism to accomplish anything truly “good” for the people of Iraq.  Lower level managers like Van Buren are stuck between appeasing the upper echelons of the government staff (some trying to move up that ladder) and genuinely trying to do good work alongside the grunts (what Van Buren sees himself doing).

Towards the end of the book he sums up the situation — accurately and astutely it would seem.  The government apparatus lumbered onward based on a childish set of metrics built around effort alone (as in “an ‘A’ for effort”), with no regard for objective assessments of results.  Throughout the book, his tone is bitingly sarcastic.  He knows real success from the false projection of it.  He has a talent for analogies.  He explains all the jargon and acronyms.  And he admirably explains all the esoteric cultural norms that are the hidden focus of the book.  The Iraq reconstruction was officially about rebuilding the civilian infrastructure destroyed by the war and giving the country “democracy.”  Without preaching about it, Van Buren chronicles how the reconstruction effort was really about the U.S. government’s attempt to displace corrupt, traditional Iraqi tribalism with corrupt, Western “free-market” tribalism.  Like a covert amateur anthropologist, he describes the many way that the cultures clash.  A recurring theme is to profile the depressingly misguided attempts by the State Dept. to promote “small businesses.”  Perhaps genuinely oblivious to how the Western emphasis on “small businesses” is basically a wedge-issue sort of distraction promoted by politicians and mass media, the State Dept. just kept trying to graft it on to an Iraqi economy that lacked foundational infrastructure (reliable electricity, water and sewage treatment, etc.) that was a prerequisite for a host of things that business (small or otherwise) require.  Those foundational issues were simply too long-term for the State Dept. and military careerists driving the bus on reconstruction, and upper leadership seemed to not really care so long as a supply of other photo ops were available.  Of course, not every project was a bust.  He does explain how a few small-scale projects that worked with rather than against local customs worked out — with no support from State Dept. leadership.

This little memoir may not paint any sort of comprehensive view of the Iraq war or its aftermath, but it does provide a trove of honest descriptions of the daily realities surrounding the United States’ Iraq reconstruction project.  For that, it should prove a valuable resource to everyone except those in power, who will continue to ignore this sort of wisdom and continue to try to suppress it and punish those who speak it.

Having been forced out of the State Dept., Van Buren continues to write (his next book was a novel inspired by John Steinbeck and Occupy Wall Street) and maintains a blog.