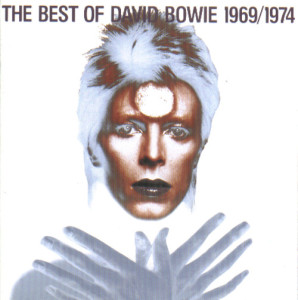 If there was ever a single rock star who epitomized the dawn of the modern rock era, it would have to be David Bowie.  This collection of his glam rock works from 1969-74 is quite nice.  But aside from being an absolute blast to hear, there is something to be said for the significance of David Bowie.  He really jumps into the spotlight in the post-’68 time frame.  That shouldn’t be slogged off to mere coincidence.  Compare Bowie’s 1973 version of The Rolling Stones‘ “Let’s Spend the Night Together” (originally released in 1967).  For the Stones, the song was something edgy for its time, but still held back.  For an appearance on Ed Sullivan’s American TV show, the Stones had to change the words to “let’s spend some time together.”  In just six-and-a-half years, Bowie’s version is a sweaty, breathy explosion of sexuality.  It’s that, plus Bowie’s persona is that of a high-heeled, jump-suited, make-up wearing, androgynous space creature.   Who would have envisioned that back when Elvis could only be shown on TV from the waist up?  Before ’68 Bowie’s look and sound would not have rocketed him to the top of the charts, it would have put him in position to be lynched.  Here was something out in the open that would have never been permitted just a few years earlier.  While Bowie had nothing to do with that social transformation, he encapsulates how those changes embodied themselves in music and popular culture.  He sort of perfectly represented how someone could step into the whole new territory that had opened up.  What made him the best, though, was that he made it all seem so genuine.

In his early phase, as in later phases, Bowie was mashing up different styles.  In much the same way photographer Robert Mapplethorpe would cross art deco formalism with taboo gay subculture, Bowie would take something like early rock and roll and doo-wop of the ’50s and add camp (i.e., a gay subtext).  This was the case with the likes of “Changes” (1971), the 1972 single “John, I’m Only Dancing,” “Drive-in Saturday” (1973) and the B-side leftover “Velvet Goldmine” (1975).  Then “Ziggy Stardust” and “Rock & Roll Suicide” from 1972’s breakout success The Rise and Fall of Ziggy Stardust and the Spiders From Mars blended 1960s urban folk with the bombast of rock opera.  When he was at his best, as he was throughout the entire 1970s, these mash-ups could work wonderfully.  His seemingly heartfelt interest in the various styles carried everything to new heights that were more than just the sum of the parts–later in his career he tended to be more of a hanger-on following whatever fad or trend was in fashion as the “new thing” that year.  Of course, his experiments didn’t always work even when he was in his prime.  Most of his early albums feature a lot of undeniably great songs.  Yet those same albums can feel weighted down by some mediocre material.  The albums as a whole, however good, never fully live up to the commanding heights of the few best individual songs they feature (it was in the late ’70s in his “Berlin” phase that Bowie turned out his very best album-length statements).  In some ways that’s an unfairly high standard to match.  But it holds true.  It also points toward a compilation like this.  On this you get the highlights without anything to bring you down.  Sure, it’s not complete.  “Queen Bitch” from Hunky Dory is missed.  Some tracks might be called superfluous.  “Space Oddity” is not really the necessity most Bowie comps make it out to be.  Still, this collection may still be about the best available option for exploring his early career.  The more mature themes and new stylistic turns of his next period in 1975-79 are summarized on the arguably even better companion set The Best of David Bowie 1974/1979–consider The Best of David Bowie 1980/1987 to be a low priority as it marks Bowie’s decline and separation from relevance.