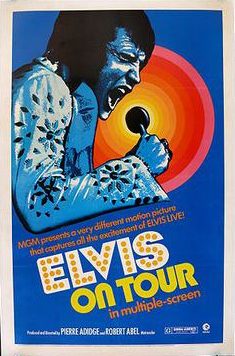 An unusual and innovative documentary that chronicles part of Elvis’ 1975 U.S. tour.  It features a “multi-screen” format, with multiple moving images presented simultaneously.  The crew filmed Elvis performing with multiple cameras, and the film frequently presents a given performance from multiple camera angles shown side-by-side, shots of Elvis interspersed with shots of the audience, and clips of similar performances from different shows presented together.  A similar approach was used a few years later in The Longest Yard.  This finds Elvis around the time he was just starting to decline.  He had a successful show in Las Vegas, and had started to take that tour on the road.  He did two shows a night, and the grind of doing a similar show for years on end was taking its toll.  The performances in the film aren’t all great, but there are some good ones — particularly further in.  The filmmakers demanded special access to Elvis, and that results in scenes that show him shuttled to and from shows, harangued by fans, and excerpts from a pre-tour interview.  The filmmakers clearly have no real interest in Elvis’ music, but are looking in on the culture of his fans with a mixture of amusement and condescension.  That’s fine, as far as it goes, because there is no narration or even titles throughout the movie.  Mostly you just see a series of documentary footage clips, though the non-concert footage gravitates toward the craziest fans caught up in a vague cult of personality, without any reference to any discussion of the merits of the music.  What’s interesting is that some of the rehearsal footage shows how much Elvis liked gospel music and how some of the stripped-down rehearsals sounded a bit more interesting that the grandiose treatments on this studio albums and in the live shows.  By 1972, Elvis’ show had settled into a formula, doing mostly the same songs over and over.  He and his band still play them remarkably well, considering.  Yet the more intimate rehearsal performances sometimes reveal something that always seemed obscured on the albums and concerts of the era.