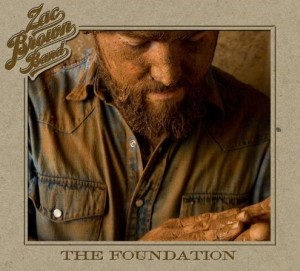 The Foundation draws heavily on easygoing beachside pop-rock by Jimmy Buffett and latter-day followers like Jack Johnson, and even Dave Matthews Band-like easygoing folk jams, but combined with typical mainstream country twang.  Parts of the album have some decent fiddle playing that leans more toward traditional country (the best thing the album has going for it), plus songs like “It’s Not OK” and “Sic ’em on a Chicken” that are more in the outlaw country-rock or Charlie Daniels Band mode.  Zac Brown, who has a rather nice natural voice, sings with contemporary country music’s usual heavily affected half-yodel with overdubbed harmony.  There are some good performances, as on the hit song “Chicken Fried.”  However, music like this should not be trusted.  It is divisive, and that is its purpose.  The opener “Toes” has the lyrics “I got my toes in the water, ass in the sand / Not a worry in the world, a cold beer in my hand / Life is good today, life is good today.”  This song sets the tone for the entire album.  Basically, this is militant ruralism, if it can be called that.  The opening lines signal that this is music that will be considered “crude” by wealthy urban elites.  This is music meant to distinguish its audience from those groups.  In a way it is meant to smugly belittle those other groups, as if they don’t “get” the characteristics of its more rural, working class intended audience (and maybe they don’t).  Elsewhere the album expresses a degree of frustration, not angrily or in an exasperated way, but to adopt implicit bewilderment by the world and a desire to just detach from it and just go off and have some fun.  It is kind of a lazy, cowardly — if not overtly mean-spirited — response to a recognition that the world is a messed up place (“It’s Not OK”), but the songs simply express a desire to get away from that, do nothing about it, and take whatever pleasures are available on hand.  The sentiments driving this album are offensively egotistical in many ways.  Some listeners rejoice that Zac Brown mentions reggae music and looks to other genres outside country, but it is worth taking a closer look to see why and how he does those things, which most often is to bolster a brand of reactionary populism that is dangerously apathetic to external corruption and reliant on discriminatory demagoguery.