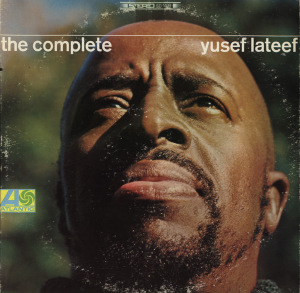 Yusef Lateef was one of those jazz musicians who was a little too enamored with himself, and the idea that he was making “sophisticated” music.  Here, as usual, the rhythm section wastes away playing mostly basic walks, with Lateef soloing in an “exotic” way on top.  The absurdly titled The Complete Yusef Lateef (this is just an ordinary album, not a collection of all his recordings) has its moments, but is mostly fluff.  The opener “Rosalie” is basically the same song as “Be My Husband” that Nina Simone recorded for Pastel Blues — here credited as “traditional, arranged by Yusef Lateef” while Simone’s was credited to her husband and manager Andy Stroud).  He also records “See-Line Woman”, another song Simone recently recorded (Broadway-Blues-Ballads).  There is one boogaloo number, “Kongsberg,” following somewhat the format of most Blue Note albums of the early/mid 1960s.  The boogaloo song is the catchiest, and the best.  What sinks this is that Lateef is rather condescending in his appropriations of exotic sounds, doing nothing to engage his sources on their own terms.  He is just appropriating the otherness of disparate (most Eastern) musics to deploy in a subordinate role within his ho-hum hard bop framework.  Consider this an opportunity wasted.